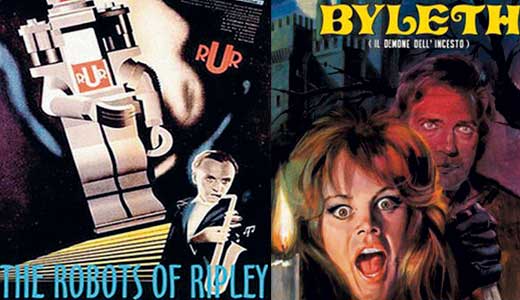 Our buds at www.SinisterCinema.com recently uncovered this all-but-unknown Italian horror flick starring Mark Damen and Claudia Gravy. Possessed by Byleth, the Demon of Incest, a man struggles to control impure urges toward his sister. Nicely Gothic, it features all those things you hope to find in an Italian horror movie: nekkid women and lots of sexy talk. Truly prurient but never naughty, with just a hint of violence. This is only available as a DVD-R, so expect a few authentic grindhouse scratches.

THE ROBOTS OF RIPLEY

Another great rarity from SinisterCinema.com, this one a Russian take on “R.U.R.” (“Rossum’s Universal Robots”), the play that gave us the word “robot.” Greedy capitalists drive their workers like slaves until a scientist creates an army of robots to do the more dangerous work — and he controls them with … a saxophone! The workers take control of the robots and march on their ruler, who savagely turns the tables on the workers. Truly inspired and surreal throughout, with great music and terrific visuals. Note that this is in Russian with no subtitles, but you won’t have any trouble following it. A DVD-R taken from a 35 mm print.

BACK FROM HELL: A TRIBUTE TO SAM KINISON

The late Sam Kinison was no stranger to Louisville (among other things, he had a passion for Steak ’n Shake hamburgers), and this simple Comedy Central doc captures Sam’s blisteringly funny human side in the many comics he inspired. With bits by Denis Leary, Jay Leno, George Lopez and Chris Rock.

A quiet, mature film about the inconsequential nature of cultural differences. Patricia Clarkson and Alexander “Deep Space Nine” Siddig star as married friends with time to kill in Cairo; they fall into a routine of examining the various ways humans go about the business of being, uh, human.

The first-ever Blu-ray release of the original “Fantasia.” For the culturally illiterate: This animated movie, the first to combine classical symphony and interpretive visuals, was such a groundbreaking event that schools across America shut down for a day in 1941 to allow everyone — students, teachers, lunch ladies — to experience it. Then, of course, Disney made an updated version in 2000 that was more for the bucks. Both are included in this excellent two-disc DVD/four-disc Blu-ray-DVD combo set with all the bonus goodies. Priceless.

A fun indie rom-com with a brilliant cast, including Drew Barrymore and Justin Long as lovers trying to keep the spark alive as they shuttle between jobs in New York and San Francisco. Co-stars Christina Applegate; watch for “Bob & Tom” favorites Rob Riggle and Jim Gaffigan in cameos.

Just plain silly-arsed action/romantic-comedy starring two of the most likeable and attractive people in Hollywood: Cameron Diaz and Tom Cruise. He’s some sort of super-spy on the run. She gets sucked up in his tailwind as he blows by, becoming his partner. A goofy, cheeky, sexy, good-time popcorn muncher, and a great first-date flick. Recommended.

This Italian/French crime drama is based on the true story of Rita Atria who, at the age of 17, walked out of the Sicilian Mafia — after her father and brother were murdered — disclosing all she knew to authorities. Excellent.

It goes against our principles to mention anything with Nic Cage in it, but since Sara Havens became managing editor, we must do as Mistress says, or she will punish us, yes she will. Here, No-Talent-Nickie pimps Disney’s next “classic cartoon turned into a cheezy movie turned into a ride” crap; a big-budget, CGI-filled quickie-comedy about a young man who learns he is to become a wizard and save the world from evil. Hey, wasn’t that the plot of “Harry P …”?

What a neat flick! Danish director Nicolas “Pusher” Winding Refn brings us the brutal if beautiful tale of “One Eye,” who escapes his Viking captors only to wind up on the road to the Crusades. But he never makes it to Jerusalem, ending up in the New World, where his party is slowly and savagely decimated by the locals. Mads Mikkelsen from “Casino Royale” and “Clash of the Titans” stars.

The inevitable sparkly vampire movie spoof from the guys behind “Meet the Spartans.” You know what to expect: 10 minutes of actual “Twilight” bashing — including a great gay dance number by the werewolf clan — padded out with pop references to Tiger Woods, the Kardashians and Lady Gaga. Jenn Proske, the gal who plays “Becca,” does a great Kristen Stewart impersonation.

Uncle Walt Disney was a very quiet, introverted man who shunned the spotlight. That’s why he fought against taking “The Group” of his best animators to South America on a goodwill tour at the request of the U.S. government during WWII. But as this rare, behind-the-scenes doc shows, he came alive when it was just him and other artists or children — usually without an interpreter. Then he turned into a child himself, acting out stories, quickly sketching characters and backgrounds, and generally having the time of his life. If you’d like a chance to see the real Disney, here he is.