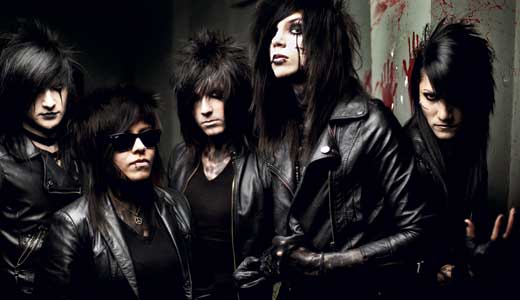 Neil Sheehan, the president of Standby Records, once told Billboard he signed Andy Six and his band Black Veil Brides because of their looks, sound and charisma, saying Six was a natural rock star. That wasn’t news to Six, whose real name is Andrew Dennis Beirsack. He always believed he was destined to make his mark in rock ’n’ roll.

“At a very early age, I wanted to entertain. I wanted to be on stage,” Six said in a recent phone interview. “I wanted to make my faces and walk around singing. It was more like a desperate need to do it.”

In 2006, when he was 15, the Northern Kentucky native put together the first version of Black Veil Brides. Three years, a number of personnel changes and one self-released EP later, Six moved to Los Angeles, where he felt he had a better chance of putting together the right line-up.

It was there that Six met video director Patrick Fogarty, and made a unique proposal for a video for a song called “Knives and Pens.”

“I had no money, but I had a song,” Six said. “My promise to him was that if you make this video — keep in mind this is a 17-year-old kid talking to him — I promise you if you make this video, it’s going to blow up huge, and it will allow you to have opportunities to make videos for us when we are making a lot of money. For him, I don’t see how he was sold on that pitch, but he was.”

Within a month of being posted on YouTube, the video received 1 million views; as of today, 18 million people have watched it.

Given the confidence Six has shown throughout the past four years, perhaps it shouldn’t be surprising that he isn’t shy about touting the Black Veil Brides’ live show. “Honestly, I feel like the show is the best show you can see right now,” Six said. “What we do is a very physical and taxing thing to be on stage.”