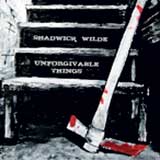 Full disclosure: I met Shadwick Wilde at a picnic in the backyard of a friend’s place on Derby Day earlier this year. He was playing some songs on an acoustic guitar hooked up to a little amp. I had never seen him before, but his songs were catchy, nicely balanced by his breathy and dramatic voice. I ended up being friendly with him, so you can assume some bias. Wilde’s solo debut — he was in some bands before — is made up of songs that alternate between weary optimism (“Wearing Thin”) and bottoming out (“Die Alone”). While desperation seems to be the common denominator, his lyrics are almost always clever, even playful, as in “Girls Like You.” Still, the intense loneliness of “When I Leave,” an autobiographical account of the songwriter’s decision to attend AA meetings (yes, he OK’d my outing him), could drive you to sobriety.