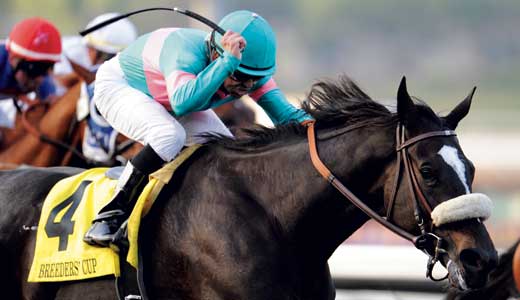 Yes she will, and no you shouldn’t.

Those aren’t song lyrics. It’s sage advice (maybe) to take to the track Saturday, when Zenyatta tries for her 20th victory in 20 starts in the $5 million Breeders’ Cup Classic (6:45 p.m., ABC). The race winds up the Breeders’ Cup’s 14-event racing spectacular Friday and Saturday at Churchill Downs, and is the 6-year-old champion’s final start. If she wins, Zenyatta will retire with a landmark record as the winningest undefeated thoroughbred in the history of American turf racing.

Add that to her growing popularity (her legion of fans spans the globe) and playful personality (her dance on YouTube), and the temptation exists to pick her to win, just as a good luck pat on the way to the post.

But the question is: Will she win? And should you bet?

Yes she will, and no, you shouldn’t.

As the great sportswriter Damon Runyon once observed, “The race is not always to the swift, nor the battle to the strong. But that’s the way to bet.” But in this case, it isn’t. If you like money, plenty more could be made on the 13 other Breeders’ Cup races Friday and Saturday. Zenyatta, herself, figures to be bet off the board — possibly going off at less than even money. That might be fine for Richie Rich, who won’t mind tossing in $1,000 for a $1,800 return. But the rest of us need odds. If you want to score big, betting against Zenyatta might be better.

So Mr. Runyon is probably wrong this time. You shouldn’t bet on prohibitive favorites. But Zenyatta will win. She’s bigger, stronger, faster and more determined than any of her 13 rivals. Plus, she is imbued with a serious pedigree for the race by Street Cry, son of Machiavellian, one of the best stamina sires from the Raise a Native line; out of a mare by Kris S., who traces to Roberto and Hail to Reason.

Distance, more than anything else, limits the chances of contenders Blame and Quality Road, who might beat other horses at the trip but not Zenyatta. Lookin At Lucky will likely grab the lead soon after the turn for home, and then it will be a matter of whether the mare can run Lucky down. Longshots who might hit the board behind the top two include Fly Down and Musket Man.

Zenyatta has limited experience away from the artificial surfaces of California tracks. But she won two races easily on natural dirt. Probably the No. 1 problem for Zenyatta is the one ever-present in horse racing: It’s just hard to win a race, any race. Let alone 20 straight.

How has Zenyatta stayed so good, for so long?

“I wish I knew,” says trainer John Shirreffs, who handles the horse for California owners Ann and Jerry Moss. “She is very special and has the real ability to lengthen her stride at the end of races. Sometimes people will say a horse will ‘quicken’ at the end of races and run a little harder. You just watch when she drops her head and starts to lengthen her stride. You seldom see that
in horses.”

Zenyatta, a tall, dark-brown horse with a white blaze down her nose, thrives in the excitement surrounding her.

“Walking into the paddock with Zenyatta is such an incredible experience; you just can’t believe it,” Shirreffs says. “You feel like everybody loves your horse and loves you. Churchill Downs is always such an emotional place. When you go through that tunnel, everybody is just yelling and screaming and the energy is going everywhere.”

European star Goldikova ships from France to try for her third-straight victory in the Breeders’ Cup Mile, on turf. Mile races in Europe are often contested over courses with long, wide straightaways, whereas Churchill’s seven-furlong Matt Winn Turf Course is curved inside its one-mile dirt oval. The potential for traffic trouble always exists, but European rider Olivier Peslier is wonderfully adept at placing Goldikova in position to launch a terrific burst of speed to the wire. He did it last year from the No. 14 post position on a similar turf track at Santa Anita.

Also on the turf, European stars Midday and Workforce are expected to be strong favorites in their races. And we like the chances of another Euro, Biondetti, in the Juvenile. He’ll have to catch Uncle Mo, though. Tab Crown of Thorns in the Dirt Mile.

A budding future star may be Juvenile Fillies Turf contender Winter Memories, who hails from the pastures of Darby Dan Farm, formerly Idle Hour, where scenes from “Secretariat” were filmed.

Looking for longshots? Include the following in exactas and tris: Banned, Sara Louise, Theyskens’ Theory and Kinsale King. Get out of the gate fast with Precision Break, who might win the 1¾-mile Marathon opener on Friday. Of course, he might not.