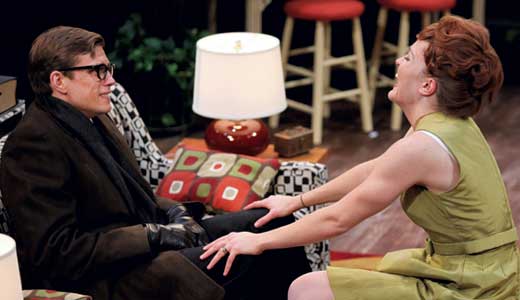 Barefoot in the Park
Presented by Actors Theatre of Louisville. Directed by Marc Masterson. Continues through Dec. 18 in the Bingham Theatre, 316 W. Main St. For tickets or more information, call 584-1205 or visit www.actorstheatre.org.

When you get a chance to see, hear or read any of Neil Simon’s work, it’s clear why he’s adored as one of the most successful American playwrights in history. He’s a master at dialogue and can turn a phrase that will make your head spin. He writes hilarious comedies with genuine heart, and “Barefoot in the Park,” adapted into a 1967 film starring Robert Redford and Jane Fonda, is one of the best.

Set in 1963 Manhattan in a small, top-floor, brownstone apartment, “Barefoot in the Park” is a play about a young married couple, Corie (Jane Pfitsch) and Paul (Lee Aaron Rosen) Bratter, and the early days of their marriage. Things go wrong and things go right. She’s a free spirit, he’s a grounded lawyer — they couldn’t be more opposite, or more clearly in love.

Even though Simon is known and lauded for his remarkable talent for wit and dialogue, Marc Masterson has directed the production with the broadest sense of comedy. In the first act, the performances upstage a lot of the dialogue. Because almost every line has some extra push or over-exaggeration, the original humor is sometimes lost — or, more often, disregarded. It isn’t until the second act that Simon’s writing comes through — when the overzealous line readings don’t upstage the actual words.

Don’t get me wrong — this is a talented cast, and it’s obvious they don’t take comic timing lightly. They make big choices and go all out, which is fun to watch, as evidenced by an audience roaring with laughter. Of the cast, though, it seems V. Craig Heidenreich was the only one who found the humor in the lines and in his character, and not despite it. In his performance as eccentric neighbor Victor Velasco, he makes broad choices, is hysterically funny, and yet allows the comedy in the script to shine on its own.

The set designed by Tom Tutino is absolutely beautiful. It’s open, airy, clean and uses every available inch of space — including the rafters. Masterson uses the set and the theater to their full advantage, directing the actors to use every available inch. And Lorraine Venberg, as always, nails the costumes. From Corie and Victor’s eccentric natures to Paul’s conservative styles (all of Paul’s ties are exactly the same), she captures the extremes while remaining believable.