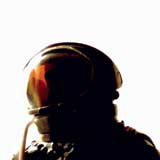 The jangle of an electric guitar — the hesitant first steps of a quest. A martial sequence of bombast from a full trio — the answer from the heavens. That’s the opening exchange for this 17-minute, standalone track. Scientists tell us that space is a vast, black gulf through which faint echoes of the Big Bang are flickering; Wax Fang gives us five minutes of song that surrender to an eight-minute portrait of space. It eventually resolves into a crescendoing wave of sound capped by horn-decorated blasts. The song’s length puts it in the tradition of the prog epic, the jam workout or the math-rock experiment. All those forms are detectable, but there’s also something distinct and original. The lead-up to the climax is executed with more control than it would have been by Pink Floyd, and less rigidity than it would have been from King Crimson. Nobody’s trying to make a radio hit here, but they’re also not trying for song-as-movie substitute. What they’ve made stands well enough on its own, while setting high expectations for next year’s follow-up.