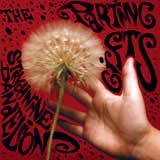 For every buck Paul Westerberg made singing for The Replacements, give Greg Cartwright $20. No, make that $100. Consider it penance for leaving Cartwright’s anguished vocals and authentic garage-rock presence undiscovered in favor of another spin of Let It Be. As frontman for The Reigning Sound, authors of the near-perfect Time Bomb High School, Cartwright crushes Westerberg’s shambolicism by outlining his heartbreak in brawn, bombast and humorous musical tangents — “this broken record has become your song” being one such example. In The Parting Gifts, Cartwright teams up with The Ettes’ Coco Hames. The pair mix equal parts ’50s rock machismo, PBR and Red Bull and stir, mixing thoroughly. Cartwright’s songwriting exploits being as well documented as they are, he’s content to let Hames unleash her nasty self (the two-minute freakout “Don’t Stop”).