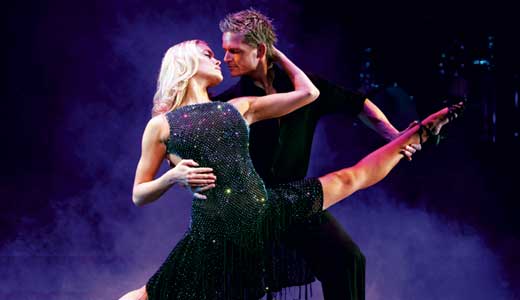 It’s bullshit that Audrina Partridge (of “The Hills”) got booted off “Dancing with the Stars” before Sarah Palin Jr. The daughter of the crazy politician can’t dance and doesn’t even care to try — as long as she gets her five minutes of fame each week. I’m just another asshole with an opinion, though, proof that the “DWTS” phenom has penetrated Middle America. To capitalize on our fascination with ballroom dancing, the Broadway show “Burn the Floor” will tango through town this week as part of the Broadway Across America series. Expect hot sexy action from a cast of beautiful athletes, dancers and actors. “American Idol” fans might recognize the name Vonzell Solomon (aka Baby V), who is the featured soloist on the show. God, I watch too much TV. —Sara Havens

Mostly considered a great storyteller, stand-up Ron Shock has lived the life of 10 men in his time. And how could he not have stories to tell? After studying to become a priest, he quit to become a jewel thief, which led him to an extended stay at a maximum security prison. After his release, he worked his way up to vice president of a Fortune 500 company, and he holds three U.S. patents in electronics. He left all of this behind to do stand-up comedy at age 40, when he befriended comic Bill Hicks. Since then, he has gone on to appear all over network and cable television, including NBC’s “The Tonight Show” (with both Carson and Leno), and, of course, he has played in comedy clubs from coast to coast. Shock will hold court at Comedy Caravan this weekend. —Brent Owen

A graduate of Villanova University, the Peabody, Mass., songwriter parlayed his job at Boston’s House of Blues into a steady gig there. In 2007, Beantown readers named him best male vocalist. As he fanned out into clubs and coffee shops, Montbleau’s strictly working-class ethic paid off, earning him opening slots for Rodrigo y Gabriela and Ani DiFranco. Martin Sexton produced Heavy on the Vine, and Sexton rewarded his client’s hard studio work and folky, funky Americana by asking Montbleau and friends to back him on tour earlier this spring. Acoustic swing masters Caravan of Thieves, built around the vocal magic of Fuzz and Carrie Sangiovanni, open. —Mat Herron

Louisville is again honoring deceased loved ones with the Hispanic holiday El Dia de los Muertos. The largest celebration is during the Nov. 5 First Friday Trolley Hop. U of L’s Arts and Culture Partnerships Initiative has teamed up with many venues to display altars created with flowers, candles and photographs. U of L has multiple altars, including one for men who died building the Panama Canal, and 21c Museum Hotel is exhibiting “Death of Childhood.”

The Kentucky Museum of Art and Craft is party central. Their many altars include one dedicated to artist Frida Kahlo, to earthquake victims in Chile and Haiti, and to domestic violence victims. There are many festivities, including food, music and a candlelit march. People are encouraged to wear masks or costumes. —Jo Anne Triplett

U of L School of Music’s Comstock Hall

Civil rights activist, historian and singer Bernice Johnson Reagon will blend music and message in a “songtalk” performance during the fourth annual Anne Braden Memorial Lecture Friday at U of L. Her presentation, which is free and open to the public, is titled, “The Civil Rights Movement and Students: Creating a Vital, Transformative Change in the Struggle for American Freedom.” It is sponsored by the Anne Braden Institute for Social Justice Research, named for the long-time Louisville civil rights activist, as well as by U of L’s School of Music. Reagon, an American University history professor emeritus, is also the former curator of the Smithsonian Institution’s National Museum of American History. She is considered a specialist in African-American oral history, performance and protest traditions, and has won a number of prestigious awards. —Kevin Gibson

Friday’s bill is the fruit of opportunity, timing and a little luck. Were it not for the inclusion of their song “Hometime” in a Toyota Prius commercial, the debut album from British electro-folk ensemble One Eskimo might never have been finished. Were it not for Beyonce snapping up his song “Disappear” for her dual identity smash, Friday’s opener Hugo would probably be lingering somewhere in the jungles of Thailand. And were it not for the micro-financing website www.slicethepie.com, Leeds acoustic pop rockers Scars on 45 might never have recorded the demo for “Heart On Fire,” which wound up on “CSI” and led to their multi-album deal with Atlantic. —Mat Herron

Elmer Lucille Allen and Valerie White are both fiber and textile artists. Don’t think you know exactly what to expect when you hear those words. “The techniques are pretty impressive,” says Walter Shannon, E&S Gallery founder and president. “What’s most intriguing is that each artist starts with the same creative instruments — needle, thread and fabric — then head down two different paths to create completely different, equally phenomenal works of art.”

The opening for “Absence and Presence” is during the Nov. 5 First Friday Trolley Hop with a Meet The Artists’ reception from 5-8 p.m. A portion of the proceeds will benefit The Center for Women & Families. —Jo Anne Triplett

Ya’ll, it’s about to get mighty kind up in here — the free kind of kind. If you are looking for a way to connect with sustainable, earth-friendly services in our region, the folks at Mighty Kindness have made it easy, fun and “with great hope in our humanity and ingenuity.” The Harvest Hootenanny also annually gathers organizations, businesses, farmers, artisans, musicians and individuals who are creating a happier, healthier community in myriad inspiring ways. I’m talking free yoga all day, a community film fest, Mighty KIDness area and workshops on everything from square-foot gardening to alternative energy solutions. Support the artists’ bazaar featuring local art, jewelry, crafts and handmade goods (for all your holiday shopping needs), and local organic food and drinks. Bands include Kathleen Hoye, Alanna Fugate, Leigh Ann Yost, John Gage and many more. —Pam Swisher

The Juilliard String Quartet, which first appeared in the Chamber Music Society of Louisville series in 1954 and has performed here many times since, is back again Sunday in Comstock Hall, at U of L. The Juilliard will perform a Schubert quartet that the young composer wrote for his family to play in 1815. The work was not publicly premiered until 1863, years after Schubert’s death. Also on the bill is a modern quartet by the late Pulitzer Prize-winning composer Donald Martino, and Beethoven’s “Quartet No. 15,” which is in five movements. The Beethoven quartet is said to be an inspiration for poet T.S. Eliot’s “Four Quartets.” —Bill Doolittle

It wasn’t a death or a breakup that inspired Louisvillian Yulee Triplett Schafer to write a book on the grieving process, it was when her daughter went off to college. A former victim’s advocate for the Jefferson County Commonwealth Attorney’s office, Schafer knew a thing or two about helping people through tragedy, having worked with families of homicide victims for 12 years. “After helping a friend with her grieving, she said to me, ‘Why don’t you write a book about this?,’ and so I did,” she says. “I hope those who read this book and have suffered a loss feel less alone and more at ease with the process.”

Schafer will do a reading and signing from “Am I Supposed to Feel Like This?” Tuesday at Day’s Coffee. The book is available at Carmichael’s and Borders. —Sara Havens

How do we stop financial crises? The first step is to understand them. Two authors who are proven as worthy guides are coming to the Kentucky Center to offer an evening of sober enlightenment on the subject. Bethany McLean’s previous book was “The Smartest Guys in The Room,” a meticulous but readable portrait of the Enron executives who made games out of tossing around people’s life savings for their own fun and profit. Her new one is “All the Devils Are Here: The Hidden History of the Financial Crisis,” and it’s again centered on incredible individuals, noble and ignoble, whose words and deeds have led much of America into a life-altering misadventure. Andrew Ross Sorkin’s book “Too Big to Fail” is a fine complementary volume for understanding the crisis — this guy really helps you understand macro movements in government and industry. —T.E. Lyons

You know how during the 48-hour Film Project, a group of people throw together a short film in just two days? Jan Street Dance Theater is taking a similar approach for its third-anniversary performance, a contemporary dance-based interpretation of Noel Coward?s “The Vortex.” The story has obviously already been written, but the choreographing, staging, rehearsing and performing of it will take place over the course of only four days, and will include original music by Jan Street music director Donald Gordon-Bell. “The Vortex,” a British comedic play, was banned from the London stage at its premiere, as it tells the tale of a controversial affair within the upper society. The show promises an intriguing modern spin on a witty and melodramatic piece, far from typical English comedy. —Jane Mattingly