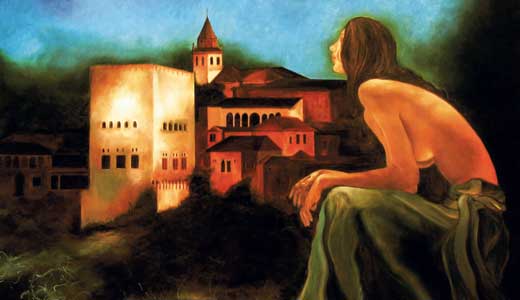 Born in 1932 and a winner of the 2000 Wilhelm Hansen Composer Prize, Danish composer and conductor Per Nørgård (pronounced PAIR-Nergore) anchors the culture jam that is U of L’s New Music Festival. It’s an appropriate invite: In 1960, Nørgård developed the infinity row — a way of producing a “constantly expanding melody from an initial two-note motive,” or musical theme, according to his bio. During his stay, Nørgård will lead the U of L Wind Ensemble, Cardinal Singers and Chorale and its New Music Ensemble and Symphony Orchestra in an event of groundbreaking music. Nørgård’s theory on composition is one that explores contrasts in human emotions and, in the natural world, the creative sides of tension and interference. —Mat Herron

I don’t want to know how much of my life has already been wasted skimming my Facebook news feed (she’s pregnant again?) and watching stupid videos of cats (LOL it’s riding a Roomba). The Internet is a swamp of guilty pleasure for some, a treasure trove of useful and useless information for others, but for too many young people, it is a battlefield where they are subject to brutal harassment, leading to psychological damage and even suicide. Looking for Lilith Theatre Company’s collaborative project, “Choices,” deconstructs the all-too-familiar trend of cyberbullying. This interactive play follows in the style of Augusto Boal’s Theatre of the Oppressed and is a grassroots effort to inform about, and hopefully prevent, cyberbullying and its tragic repercussions. —Jane Mattingly

Eddie Griffin is known as much for his unpredictable temperament and his big mouth as he is for being one of the most hailed comedians of his generation. That cocktail of attributes has garnered him a lot of praise and countless comparisons to his idol, the late Richard Pryor. Breaking onto the scene in the late ’90s with the Showtime special “Voodoo Child,” Griffin stepped up his game by releasing his next concert film, “Dysfunktional Family,” into theaters instead of opting to premiere it on cable like most comics do. His other films — including “Deuce Bigalow: Male Gigolo” and its sequel, “Deuce Bigalow: European Gigolo” — are forever etched in the annals of comedy greats. Griffin was also the object of the VH1 reality show, “Eddie Griffin: Going for Broke,” which chronicled his life as a successful performer who had no money left. Read our full interview with Griffin at www.leoweekly.com. —Brent Owen

The Louisville Visual Art Association and U of L Hite Art Institute host an art auction each year to raise money for visual art education. All of the proceeds go to LVAA’s Children’s Fine Art Classes, which help educate 8-18-year-olds in 32 locations around the city, and U of L’s Mary Spencer Nay Scholarship, which assists a freshman art student. This year, the auction features works by more than 125 local and regional artists that will be available for purchase in both silent and live auctions (the live auction begins at 7 p.m.).

The ticket price includes a buffet from Foxhollow Farm and chefs Amber McCool and Matt Jones of Red Clover. Beverages include Falls City Beer and a special “Art on the Rocks” cocktail by Brown-Forman. —Jo Anne Triplett

Nakedness alert! The Makery gallery is getting R-rated at its one-night-only exhibit, “[M]akery: Mature Audience Art & Craft Show.” They’re swapping out the typical landscapes, abstracts and watercolors of Spanish villages with nudity, suggestive dialogue and graphic violence. Yes! The press release says to expect anything from cursing cross-stitch to graphic photography, and dirty-minded artists include Logan Reulet, Julie Leidner, Shannon Kempf, Brad Cape, Doug Turner and Thea Lura. Owner Melissa Liptrap says that while the venue is usually family friendly, she sometimes feels like she’s missing out on great art, hence the idea for the one-night-only adult-themed exhibit. “Uncensored art is definitely the most creative and original,” she says. Bone up. —Sara Havens

Boston poet Matthew Lippman is a liar. His book “Monkey Bars” is absolutely filled with untruths — and a lot of truth, actually; as is the case with many Facebook relationships, “it’s complicated.” Lippman, who will read from “Monkey Bars” Friday at The Bard’s Town as part of the InKY Reading Series, will also conduct a poetry workshop titled “The Lie: Imagination and the Creation of Truth Saturday” Saturday at ArtSpace (323 W. Broadway), next to the Brown Theatre. This workshop ($20, 10 a.m.-noon) will explore the notion that “lying in one’s poetry actually makes better poems, more interesting poems, poems that speak to the truth in a fresh and exciting manner.” Told you it was complicated. Lippman will explore the works of other poets, looking for the lies behind the truths. Or the truths behind the lies. —Kevin Gibson

This is the future by way of the past. What did people in the 1950s think the future would be like? “Art After Dark: Futurama!” answers that question with art, music and fun all related to mid-20th Century ideas of the future. I’m still waiting for my rocket pack! On the theme of “the future is in outer space,” visual artist Scott Scarboro will present “a lo-fi, low-tech, outer space soundscape with circuit-bent gadgetry” in that way only he can. Filmmaker Ryan Daly will show his “Cinema Rondure,” the band Phantom Family Halo will perform, and The Nitty Gritty vintage store will present fashion vignettes.

The Speed has requested people drive their vintage mopeds, scooters and Vespas to the event in exchange for a free ticket. What, no Nash Metropolitans? —Jo Anne Triplett

When you’re the youngest of 14, being heard, let alone getting a full plate at the dinner table, can be like hiking Everest, so it’s little wonder that Iris Dement has forged a profession out of speaking, and singing, her mind. Didn’t matter that, in the early ’90s, Nashville’s establishment country radio didn’t pick up on the Paragould, Ark., woman’s debut, Infamous Angel. She squeezed blood from that turnip and, through word of mouth, got a deal with Warner Bros. Records anyway. Dement’s folk ruminated on war, sexual abuse, religion and government, and she collaborated with John Prine on his 1999 album, In Spite of Ourselves. —Mat Herron

‘Sketches of the Alhambra’

It’s going to be a night full of flamenco dancing and original artwork by singer and dancer Graciela Perrone Friday at Caffé Classico. Perrone is debuting her “Sketches of the Alhambra” series, which is a lead-up to her next show, “Brushstrokes of the Alhambra.”

“With this show, I am telling a story that incorporates all my art, which is based in the art of flamenco,” she says. “The music, the flamenco, the paintings, the songs, the dance — they’re all part of the same pallet to paint a masterpiece on a night to remember.” Flamenco guitarist Brent Del Bianco joins in on the festivities. —Sara Havens

Remember Sarah Lyon, who did the calendars of female mechanics? Or the dude who runs the gallery at the 930 Center, Michael Winters, who just had his own photography show with his wife? If not, I guess that’s cool, because you can catch their photographic handiwork at Bellarmine University’s first Photography Invitational Exhibit, where Lyon and Winters will showcase some of their work alongside the likes of four other local and regional photographers. Among them are Bellarmine professor Jana McNally, with her images of Eugene, Ore., and Michael Brohm, with his ongoing project “Yesterday’s Images,” a depiction of Russia. Mitch Eckert and Justin Chase Lane will offer their constructed images of still-life and other random stuff, which explore anything from the relationship between objects to our own connection to the universe. —Jane Mattingly

Pianist Jeremy Denk performs the Grieg Piano Concerto in A Minor with the touring Moscow State Symphony Saturday night in Whitney Hall. The popular piano work, written in 1868, was the first piano concerto ever recorded, in 1909. The score was edited to just six minutes to fit onto an early disc. Also on the program is Tchaikovsky’s “Capriccio Italian” and Ravel’s orchestral arrangement of Modest Mousourgsky’s “Pictures at an Exhibition” for piano. Mousoursgsky penned the piece as kind of a musical tour of paintings by Victor Hartman. One of the most well known of the picture tunes is the regal “Great Gate of Kiev,” based on Hartman’s architectural design for a city gate to honor Russian Czar Alexander II. The gate was never built but is still inquired about by tourists. —Bill Doolittle

Jewish Festival of the Book

How would you respond if your teenage kid said that the family wasn’t doing nearly enough about the lives of others? Kevin Salwen listened to daughter Hannah contend that they all could do better than simply buy and build their way to the upper-middle-class American Dream. And eventually, Dad said OK. That started efforts that snowballed into even more interesting discussions and decisions for the Salwen family, who downsized their entire lifestyle, as recounted in the book “The Power of Half: One Family’s Decision to Stop Talking and Start Giving Back.” Kevin Salwen will discuss his family’s remarkable changes Monday evening as part of the ongoing 2010 Jewish Festival of the Book, which runs through Nov. 21. At a time when the coffers of many charities are drying up just when they’re needed more than ever, this family’s resolve and achievements are well worth considering. —T.E. Lyons