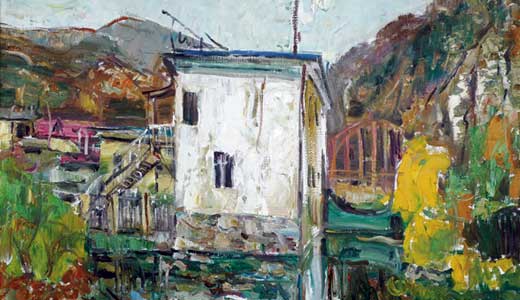 Land of Tomorrow (The LOT)

Completed in 1964, Terry Riley’s “In C” was a watershed moment for composers who cherished minimalism. Many of them credit Riley’s piece for ushering the genre toward the prominence it enjoys today. The bearded wonder from Colfax, Calif., recommended the piece be played with as many as 35 people, and Wednesday night, musicians will try to do just that, recreating Riley’s most famous work. The NovemberGroup features members of The Commonwealth, Ut Gret, Softcheque, Lucky Pineapple and Another 7 Astronauts. Thomas A. Minor & The Picket Line opens, and in the spirit of Thanksgiving, there will be a sit-down potluck starting before the show and continuing throughout the performance. —Mat Herron

Mission control is right. The Georgia trio of Julian Dorio, Parker Gispert and Tim Deux has seen its smarter-than-your-average garage rock show grow more explosive in recent months: arena dates with The Black Keys, Kings of Leon as well as Black Rebel Motorcycle Club, coupled with appearances on late-night TV and at festivals from Forecastle to Fuji, place The Whigs on a permanent upswing. But this Louisville stop, one of several that these ATO artists have made over the last three years, carries added purpose: $2 from every ticket will be donated to Starduck Charities, a nonprofit that buys gifts for the orphans of St. Joseph’s Children’s Home in Crescent Hill. Midnite Sons, whose lineup includes former Crain and Cerebellum guitarist Joey Mudd, and Bad Blood, which features members of Metroschifter and Health & Happiness Family Gospel Band, open. Some things in life are more important than rock, but sometimes rock helps make life more important. —Mat Herron

Best of the Bluegrass

Comedy Caravan’s “Best of the Bluegrass” will be a series of shows that highlight the funniest comedians this town has to offer. With eight of our finest comics, the entire weekend will be a revolving door of seasoned, road-tested and homegrown talent ready to put a smile on your face. Each show will have a changing line-up that will include a few of the following comedians — Big John Richardson, Mark Klein, Cleveland, Bob Batch, Adam White, Zan, David Bizanis and Brad Lanning. Each has not only spent time on stages and open mics around Louisville, but they also have put in time on the road performing for audiences across the country. And though you may not know who will be performing at each “BotB” show, you’re still guaranteed a great time and a lot of laughs. —Brent Owen

Watching football has become THE great Thanksgiving tradition. But what if you don’t like football and can’t afford cable? Check out RTV, a retro goldmine of classic ’60s and ’70s TV. Think of it as leftover television to go with your leftover turkey. And I’ve already got my football-free Thanksgiving planned out: After the pumpkin pie, I’ll take to the skies with “Airwolf” at 1. Then, who loves you baby? Kojak does at 2! Then I’ll fight the Cold War with Bill Cosby in “I Spy” at 3. The tryptophan will start to knock me out halfway through “Rockford Files” at 4, but I’ll be sure to wake up in time for “Magnum P.I.” at 9 and round out the day with a little “Emergency!” action at 10.

A word of warning: RTV is free, but the coverage is spotty and you’ll need a strong digital antennae. But no retro tin foil or rabbit ears should be needed. —Ben Schneider

Chances are, you’ll recognize the face behind the counter at the new Greenhaus store in Germantown. Daniel Duncan, a bartender at Nachbar and member of the band The Commonwealth, opened the “plant, wine and home” shop with his family, and they’re planning a grand opening bash on Friday. “We opened the Greenhaus to bring together the things that we love,” he says. “The things that comfort you, that make your haus a home. Things that you drink, savor, sit on, contemplate, read under, water and breathe in.” The party will feature art by Stephen Dorsett, live music by Jacob Duncan (Daniel’s brother) and Craig Wagner, food, wine and more. The store opens at 10 a.m., the music starts at 3. —Sara Havens

Retailers are contorting their traditional definitions of Black Friday this year, starting sales pushes earlier in November — in some cases after Halloween — in an effort to boost the fourth quarter, but at ear X-tacy, this holiday season is about more than numbers. After surviving potential closure in February, the store is kicking off the holiday shopping season by celebrating the release of the new Shipping News album (full disclosure: I helped release the LP), with performances by a cappella powerhouse Sandpaper Dolls and the thinking man’s singer-songwriter, LEO columnist and former write-in mayoral candidate Joe Manning. Friday will be a great litmus test on whether consumer dollars spent in town help preserve Louisville businesses. —Mat Herron

Here’s the deal, loyal bookworms: Joseph-Beth is working to get over its recent Chapter 11 filing. They’ve been a great bookstore for the literary community in Lexington, but they also deserve our love with all they’ve done for Louisville authors. Fantasy veteran Michael Williams has just started a regional tour for his new novel, and he’ll be reading and signing at Joseph-Beth on Tuesday night. “Trajan’s Arch” deals in metafiction, and it touches as much on the character of fantasy writers as on their worlds of wonder. If you don’t want to head east for this particular evening, there’ll be other, closer stops to catch up with this contributor to the “Dragonlance” series, including U of L’s Ekstrom Library (Dec. 7), Destination Booksellers (Dec. 8) and A Reader’s Corner (Dec. 9). —T.E. Lyons

Land of Tomorrow (The LOT)

Larry Kramer’s “The Normal Heart” debuted in 1985 and was the first play to address the AIDS epidemic. In celebration of its 25th anniversary and to keep the play’s messages going strong, director Tom Trudgeon and his Actor Saturday ensemble will present the play next week. It opens on Dec. 1 to commemorate World AIDS Day, and a portion of the proceeds goes to the AIDS Services Coalition Center. “‘The Normal Heart’ is about how as a (LGBT) community, we must recognize and have pride in our contributions to society as they stand throughout history as well as today,” Trudgeon says. “The autobiographical characters in this play are some of the most exciting and robust you’ll ever see on stage — the way they fight the media, the government, the medical profession and even apathy and moral conflict within their own community during this frightening time period.” —Sara Havens

Dan Pfalzgraf is right — oil and water don’t mix. Since it’s doubtful he’s giving us a cooking tip, we have to dig deeper to understand the meaning behind the title. “(The exhibition) is centered on the emphasis placed on our society’s dependence on oil,” he says. “We are all affected by the politics surrounding oil, even though we each only have a very modest voice in its policies. For combining the ideas of ‘water creates life’ and ‘oil creates civilizations’ themes, I decided to paint images of figures, painted with the motor oil, swimming through water.”

Pfalzgraf’s technique is as intriguing as his media: blind contour drawings (drawing the figures without looking at them). Since it’s not often seen in finished art, it gives an intimacy and urgency to his work. —Jo Anne Triplett

Shopping malls and big-box stores have been blasting Christmas tunes since Halloween, but I refuse to acknowledge the holiday season until the week of Thanksgiving. That means it’s finally game on, and now that I’m officially in the spirit, there’s no better way to celebrate (other than maybe eggnog) than by strolling through a wonderland of holiday sculptures. The Galt House is home to KaLightoscope Christmas, a luminary display of towering sculptures made of painted fabrics. The exhibits — including “Santa’s Midnight Flight Over the World,” “Toyland” and “Nativity” — are located in the toasty confines of the hotel’s 16,000-square-foot pavilion. Additional holiday happenings at the Galt House include a Mistletoe Marketplace, musical performances and what’s being billed as the world’s largest Gingerbread Village (not for consumption, kids!). —Sarah Kelley

Gallery M has given us a twofer: Chinese artist Wang Jianguo, his first show in America, and Derreld Hallenbeck’s take on mid-century modern furniture. As president of the School of Art and Design at Jilin Art Institute at Changchun, Wang’s style is Western, using abstraction with impasto to give texture to his landscapes. He’s been showing his work internationally for years but not in America. Kudos to the curator of the show, Jane Ferebee Smith, for bringing his work to Louisville.

Hallenbeck’s eco-friendly furniture came about despite his upbringing. “I actually had distain for (mid-century modern) design in general,” he says. “The home I grew up in was full of some of the worst representations of the movement. My education gave me … an appreciation for MCM’s efficient, clean aesthetics.” —Jo Anne Triplett

Let’s just be honest — adults are probably going to be way more into this than the kids. The munchkins will get to see what life was like pre-iFun, and the grown-ups get to experience nostalgia at its finest. The Frazier International History Museum just opened a 3,800-square-foot exhibit featuring more than 500 toys from the last 75 years. Presented by Mountjoy Chilton Medley, the characters of “Toy Story” take visitors on a tour of the finest toys of America, hitting all the classics from Mickey Mouse to Lincoln Logs to My Little Pony. There also will be art, original movie storyboards, TV clips and trivia — and we’ll finally learn the truth about Mr. Potato Head. —Jane Mattingly