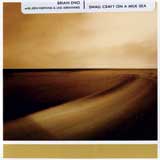 For ambient wizard Brian Eno, the journey matters. He’s spent a career going to great lengths to push limits of sound and fashion altogether new ones, as if he’s constantly rewiring his brain and documenting what cerebral waves ricochet inside the gray matter. Sought by music’s richest barons (U2, their derivative Coldplay, and Talking Head David Byrne) as a svengali of reinvention, Eno’s exhibitions where he’s wielding greater control are his most thought-provoking. As expected, these compositions, with electronic producer Jon Hopkins and guitarist Leo Abrahams, veer between tranquil (“Emerald & Lime”) to ominous (the title track, “Complex Heaven”) to vicious and unforgiving (“2 Forms Of Anger,” “Flint March”). The limber bass and keyboard interplay on “Bone Jump” is undeniably cool, and the vocal creep on “Written, Forgotten” rings with finality. With so much music out there, it’s nice that we can count on Eno to keep sonic art interesting.