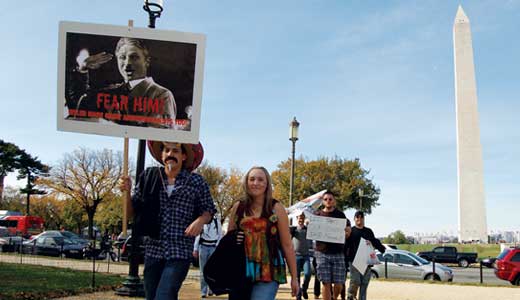 WASHINGTON — The rally is over, and I nearly crash into her: a young woman in her early 20s, wearing a headband and feverishly hula-hooping on the National Mall like it’s Bonnaroo and Phish is farting out a four-hour guitar solo. The mood in this diverse crowd of 250,000 is very jam festival, particularly the drum circle that erupted somewhere near the Washington Monument — an expected occurrence anytime liberals gather in groups larger than 15.

Moon Beam nods and smiles at me vacantly, broadcasting a kind of politically neutered, Bush-era sentiment that says, “If we just hula hard enough, the wars will end overnight.” I imagine her tea party counterpart sweating over a phone bank somewhere, imploring people to vote for Rand Paul.

If there was a message to be gleaned at Saturday’s Comedy Central-approved Rally to Restore Sanity And/Or Fear, most people in the crowd’s middle and outskirts couldn’t hear it. The din of conversation and repeated shouts of “Louder! Louder!” drowned out Jon Stewart/Stephen Colbert & Co.’s jokes-and-hope rhetoric, leaving the impression that the underlying theme — conveyed by innumerable witty and well-constructed signs — was, “I may not be able to get a job with my college degree in this economy, but damn it if this self-referential sign isn’t clever.”

“The Internet is so impersonal,” says Peress, 80, a symphony conductor who once performed with Duke Ellington during Lyndon Johnson’s administration. “Internet activism defeats the purpose of something like this, which is to really connect people with one another and to show that we’re not afraid; that there are more of us than there are of them.”

The satire employed by Stewart and Colbert helps to “cut through the media’s bullshit,” Peress says. “And being here helps you know you’re not nuts in this country, so I guess ‘sanity’ is a good word for this.”

But the true, unironic intent of the gathering — largely a political variety show inspired by users of the social news website Reddit, peppered with cast members from “The Daily Show” and musical performances by Ozzy Osbourne and The Roots — would be explained by Stewart near the program’s end:

This was not a rally to ridicule people of faith. Or people of activism or to look down our noses at the heartland or passionate argument or to suggest that times are not difficult and that we have nothing to fear. They are and we do. But we live now in hard times, not end times. And we can have animus and not be enemies.

The press is our immune system. If it overreacts to everything, we eventually get sicker. And perhaps eczema. Yet, with that being said, I feel good. Strangely, calmly good, because the image of Americans that is reflected back to us by our political and media process is false. It is us through a funhouse mirror, and not the good kind that makes you slim and taller — but the kind where you have a giant forehead and an ass like a pumpkin and one eyeball.

This was a far cry from Glenn Beck’s Rally to Restore America, held last month at the opposite end of the Mall. The Howard Beale of FOX News implored a crowd less than half the size of Stewart’s to dismantle the welfare state and that a fat-headed, white conservative can, for a day, pretend to be Martin Luther King Jr.

By the time you read this, Beck’s tea party-centric ethos will likely reflect the outcome of political races across the country, which New York Times’ FiveThirtyEight polling blog predicts will yield massive gains for Republicans in both chambers of Congress and pickups in several governor’s offices. Not surprisingly, the Sanity rally has a kind of somber partisan tinge; a sense that when these left-leaning, largely Democratic people go home, take their costumes off and place their signage in the proper recycling receptacle, the specter of a Republican-led Congress will be waiting for them.

“We live in a very conservative suburb in Cincinnati,” says Mary Smith, who drove to the rally with her husband, Denny. As self-described moderate-liberal Catholics, the Smiths, like most people here, are basking in the warmth of collective diversity and like-mindedness, not unlike the popularity of opinion-based networks like MSNBC and FOX News are relative to liberals and conservatives, respectively.

“They can be pretty extreme,” Denny says of his neighbors. “All our (political) yard signs get stolen by their home-schooled kids. Found them in our trashcan. We’re trying to move out to Colorado to be with our two sons as soon as we can afford it.”

Others, like David Kapner, want the rhetoric “taken down a notch in our public discourse.” Kapner, a 47-year-old attorney from New Jersey, held a sign that read, “I am willing to compromise.” He thinks people should “try not to be assholes to each other, and simply listen.”

As the rally-goers disperse, it appears one of Stewart’s commandments — “We want to leave the place cleaner than we found it” — is heeded: Trash bag-wielding liberals scour grounds for detritus, removing all traces of their presence, commenting on each other’s signs and laughing. Moon Beam and her ilk hula into the late afternoon, their only care whether the circle keeps on spinning.