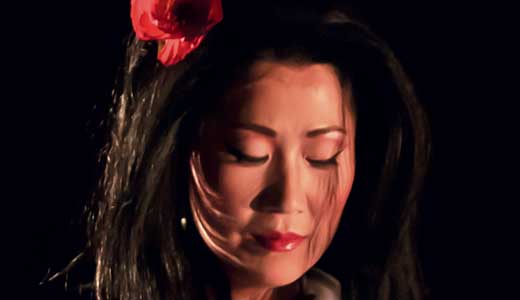 In 1904, Giacomo Puccini stood with one foot in the Old World, and one foot in the New. He had become the acclaimed successor of Rossini and Verdi, the new maestro of Italian opera. But like so many around him, the dapper and worldly composer was also a man stepping forward from the 19th into the 20th century. Puccini was interested in new lands and new peoples, new cultures and new settings for his operatic dramas. He had set “La Bohème” among the young Bohemians of Paris, and would reach across the sea for “The Girl of the Golden West.” His brother had settled in South America and a sister was married to an envoy stationed halfway around the globe in Japan. It was the sister who suggested Puccini create a new opera around a story from a book called “Madame Butterfly,” by John Luther Long, that told the tale of an ill-fated love between a sheltered young Japanese girl and a dashing American naval officer.

“I think it is important to know that as European borders were evaporating, the entire world was getting smaller,” says Kentucky Opera music director Joe Mechavich, who will conduct Puccini’s “Madame Butterfly” Friday and Sunday at the Brown Theatre. “All of a sudden, Japan opened up in the latter part of 19th century, and you had an influx of that new culture into Europe. It turned on the writers and painters and poets and musicians to a whole new world. And Puccini was very much influenced by it all.”

Of course, “Madame Butterfly” is written in the tradition of Italian grand opera, with all the lush strings and beautiful orchestrations. But the music also is imbued with snippets of Japanese song and tinged with Oriental harmonies, providing “Madame Butterfly” with a feel of the Far East.

“The love duet in Act One is written completely in the Italian fashion, with all the spaghetti and pasta sauce hanging from the walls you could ever want,” Mechavich says. “But it also uses traditional Japanese motifs and tunes that create the environment of Nagasaki, Japan. (At one point) Puccini uses a Japanese war hymn, and cherry blossom themes create the harmonies that are associated with that part of the world.”

Later, when Cio-Cio San, the Butterfly, renounces her Japanese heritage, her uncle levies a curse upon the lovers. The audience, perhaps without even realizing it, will hear the notes of the curse’s theme again as the tragedy unfolds.

“She is an Asian and a teenager, so she’s very much a novice in dating,” Lee says. “And meeting a man and getting married to a Westerner, she is just very reserved in the beginning around relatives and family. When she is left alone with him, she is still nervous. But as she is more with Pinkerton, the American officer (tenor Adam Diegel), she is more assured: ‘Oh, this man will protect me, so I feel safer and secure.’”

If all of this seems dated, it is. But in some ways, only the costumes have changed. A century later, the once-distant world is becoming even flatter, as author Thomas Friedman would put it. In 2010, we even have our own name for the clash of cultures: “globalization.”

But the intimate love story of “Madame Butterfly” is timeless. It begins with the lovers’ duet in Act One, “O quanti occhi fisi.”

“It is the dramatic pulse of exactly that moment where one is hesitant,” continues Mechavich. “Then he becomes a little more physical — to the touching of a cheek, to a hug, to a kiss. Puccini has the pulse of it, has that mood in the music. He was the master when he composed, and he didn’t just write the melodies and the words. In his mind, you can tell he also saw the staging and how the actors were going to interact, and gives them the music to support it.”

That’s Puccini in 1904, leaving almost nothing unsung, as a director today might leave nothing unrevealed.

“She opens up slowly,” says Lee. “She says, ‘Oh, love me like a baby, I am so delicate.’ He says, ‘Love will not hurt you.’ And she says, ‘Yes, I will love you for my life.’ Her words gradually develop into a full committed love, while the genius of Puccini in the music builds all the modulation, the high notes, the soaring. So by the end of the last high C chord, you know they are perfectly united.”

Of course, it is a love that cannot last.