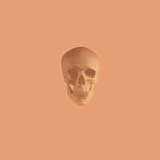 One of Us from Cincinnati’s Pomegranates features pleasantly contrasting funk bass, punk drums and delayed, ambient guitars. “’50s” reveals itself as a tight stab of new-wave rock strung together by repeated lyrical mantras on positive relationships, while “Skull Cakin’” is pure Ramones. Midway through, the band solidifies its knack for upbeat, personality driven rock and descends into confessional moments (“Between Two Dreams”). They avoid leaning too heavily on pop’s overwritten dramatics by turning in broad airy brushstrokes like “White Fawn,” “Venus” and “Perception,” but the album could’ve gone in even more adventurous directions had Pomegranates continued to explore their interest in the abstract. “Into the Water, Into the Air” promises that on the next album.