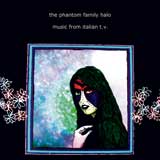 Over the past year, The Phantom Family Halo released its Monoliths & These Flowers Never Die double-album and subsequently played a number of epic shows in town. Music from Italian TV continues with a pleasantly confusing blend of styles in a more concise format. Staples of their live show, like “It’s OK About the War (Gettysburg Jam)” and “Bringing Back the Dead” get a more polished, sublime treatment, while longer tracks like opener “I Believe In Everything” and “Overkirsh” present yet more experimentation, the former resembling a jam off Amon Duul’s 1969 classic Psychedelic Underground played backward and superimposed with television dialogue. There are a number of good bands in Louisville these days, but there’s not another band here, much less the rest of the nation, as inventive as The Phantom Family Halo. The Phantom Family Halo performs 7 p.m., Friday, Nov. 12, as part of Art After Dark at J.B. Speed Museum ($5 for museum members, U of L and Bellarmine students, $15 for non-members).