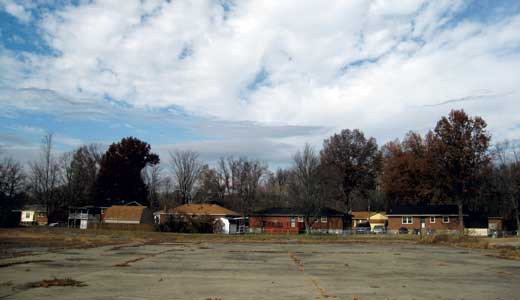 As newly emboldened House Republicans vow to block unemployment benefits amid a deepening national recession, a new report reveals that the number of Americans living in poverty in the suburbs has finally eclipsed the number of those experiencing poverty in the inner-city — and that the rate of suburban impoverishment is quickening with such alarming speed that social services are scrambling to catch up.

Using data culled from the Census Bureau’s 2009 American Community Survey, the Brookings Institution has found the poverty rate jumped from 13 to 14.3 percent in the nation’s 100 largest metropolitan areas between 2007-2009. The number of poor people in large metropolitan areas jumped by 5.5 million between 1999-2009, with two-thirds of that growth occurring in suburbs. Nationally, cities and suburbs alike gained 1.5 million in nouveau poor between 2008 and 2009, which represents the largest increase yet since the Great Recession began.

But what about Louisville?

Although the city and its surrounding suburban communities experienced no change in the poverty rate between 2007 and 2009, further examination of the numbers suggests we haven’t necessarily bucked a bad trend: A similar report released by Brookings in January indicates that, over nearly a decade, the number of people classified as living at or below the poverty threshold ($21,834 for a family of four) increased by roughly the same amount in both Louisville’s urban and suburban neighborhoods. From 2008-2010, the number of people living in poverty in Louisville Metro increased by 16,588 in the city and by 15,787 in the suburbs — nearly the same rate.

Despite a lack of new census data and Louisville’s historic concentration of urban poverty (currently outnumbering its suburban counterpart by a nearly 2-to-1 ratio), social service providers and poverty outreach coordinators say that, increasingly, the help they are providing is to people who’ve never needed it before.

“We are definitely seeing an increase in people who have had sustained employment and income in the past,” says Terri Leasor, an administrator at south Louisville’s Neighborhood Place. “Unfortunately, though, we don’t even think we’re getting the tip of the iceberg. We’re working to get access and outreach to these folks who may not know or be able to access our services.”

Leasor says there are psychological ramifications to unemployment and poverty, and that a person’s ego can get in the way of accurately perceiving their economic needs if they are still in denial about losing a job and have never had to ask for assistance before.

“The neighborhoods that were heavily impacted in the earlier part of the decade, such as west Louisville, there are still high foreclosure rates there,” says Jane Walsh, family success coordinator for Making Connections Network. “But the really dense concentrations of foreclosure filings now are in Shively, PRP, Okolona, J-Town, Bon Air. It’s in first-ring suburban neighborhoods, but also a little further out, as well.”

Others, like the Metropolitan Housing Coalition’s Cathy Hinko, think part of the difficulty in bringing social services to the suburban poor is a matter of affordable transportation.

“As an example, let’s look at the travel (schedule) to apply for LIHEAP (Low-Income Home Energy Assistance Program) and other utility cost assistance,” she says. “Just to get an appointment for LIHEAP, you must show up in person at either 810 Barret or Newburg Community Center or Dixie Highway Government Center between 8 a.m. and 1 p.m. Then you might get an evening appointment if you request, but no matter what, you have to come back a second time for your actual appointment. Then, if you still need assistance paying a utility bill, you will have to travel to the community ministry — during their hours.

“Suppose you have children under school age or work during the day, both of which can complicate your freedom to travel,” Hinko continues. “Lord help you if you live in the suburbs and do not have your own transportation. It is not easy being a low-income family.”

Ross Hintz, a middle-aged construction worker who relocated to Louisville with his 13-year-old son in July, understands such obstacles. When homebuilding dried up in his native California, Hintz and his son traveled across the country and moved in with his daughter, who lives in the Whispering Hills neighborhood in Okolona. But the cramped living situation — seven adults (only four of whom are employed) and four children — was too much for the father and son.

“I’m Dad, and Dad’s always got something to say, you know?” Hintz says, laughing. “It was too crowded, and I didn’t want to get all up in her business. I wanted to let her live her life so that there’s no animosity between us. We get along and we love each other — there’s no lack of that.”

After losing a temporary job in Bullitt County, Hintz and his son moved into the Volunteers of America’s family emergency shelter once their motel money ran out. As a result, Hintz’s son, who attends Moore Traditional High School, must now endure two hours on the bus each day to attend a school he used to be able to walk to.

Hintz has since found employment in the security industry and hopes he can carpool with co-workers. Otherwise, he’ll continue getting to know the intricacies of his TARC route.

What’s worse, Hancock says the average duration of a family’s stay at the shelter has doubled from a year ago.

As a result, the perceptions of poverty must change, as well.

“We have defined poverty, and it looks a certain way to us,” says Walsh. “The suburbs, for many people, were a symbol of moving up and out of poverty and onto a new opportunity. Right on the heels of the foreclosure crisis, we’re going to have to have another blow to our self-image as Americans. We have this idea of who we are, and we keep getting whacked upside the head.

“I think we see the kind of chaos it causes in people’s perceptions of themselves and their country,” she continues. “We just saw that in the election, in how fractured we are as a country. I do think that’s part of what we’re seeing: People literally are freaking out, because who are we if we are not people who can attain this dream? If we’re not people who can move on and up to the next best thing, if there’s not something always better around the next corner, if there’s not a manifest destiny, then who the heck are we?”