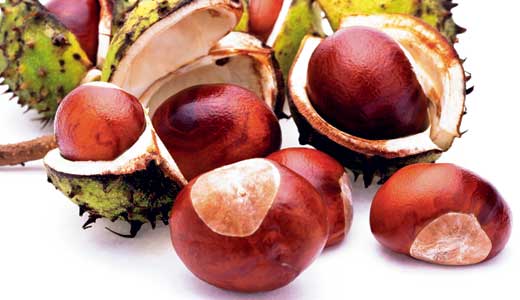 Last Thanksgiving was the most memorable yet. It wasn’t memorable because of the family and friends I spent it with or the delicious spread on the table. Last year was the year I mutilated my finger while making chestnut stuffing. For those of you who don’t know me, I do have all 10 digits intact — but I came close to losing the tip of my pointer finger when I stuck it in an immersion blender, then turned it on.

Every family has their Thanksgiving traditions and favorite recipes. There aren’t a lot of constants in my family’s Thanksgiving, but my grandmother’s chestnut stuffing always makes an appearance. Since she passed away in 2006, I’ve been charged with keeping this family favorite alive.

Last year, I spent the night before Thanksgiving at home making stuffing. Everything was going great until I decided my new immersion blender might be a better way of mashing chestnuts than using a potato masher. Eventually, the blade got clogged, and I evidently thought it was wise to unclog it with my finger. Once the blade seemed clear, I turned on the blender — before I had removed my finger. Blood was everywhere. I spent the rest of the evening in the emergency room getting nine stitches. While I was getting stitched up, I couldn’t help but worry about showing up stuffingless on Turkey Day. I’m pretty sure the family could have dealt with the loss of a family pet easier than the absence of their beloved stuffing on Thanksgiving.

I asked the doctor if it was sanitary to use the potentially contaminated chestnuts if I was going to bake them next. He said it was, but he didn’t think I should tell anyone if I did this. This seemed impossible given I was going to be showing up with a bandaged finger and because at least one of the guests had already seen the evidence. This proved to be irrelevant when I got home and found that my dog had eaten said bowl of chestnuts while I was at the hospital.

In the morning, I called my parents to let them know what had happened, and before I could finish my story, my dad cut me off — “Let’s get to the bottom line … are we going to have chestnut stuffing
or what?”

I started over in the morning with new chestnuts and a borrowed set of hands, and prevailed with two casserole dishes of chestnut stuffing. I felt like a hero when I showed up with stuffing, sporting a bandage on my throbbing finger.

When I took a bite, it was the most delicious thing I had ever tasted. I spent the next month with my finger bandaged, giving me plenty of opportunities to talk to people about the incident. What I learned was that most people have never even tried chestnuts. That’s too bad — they are delicious.

American chestnut trees used to be ubiquitous in this part of the country. At the turn of the century, chestnut trees outnumbered oak trees east of the Mississippi and made up an estimated 25 percent of the trees in the eastern United States. Sadly, a fungal blight wiped out a large portion of those chestnut trees, and, as a result, chestnuts largely disappeared from the American diet. Over the years, blight-resistant chestnut trees have been planted, and chestnuts have slowly begun making their way back into American cuisine.

Locally, chestnut trees are becoming more popular. I’ve seen chestnuts for sale at farmers markets, and we have chestnut-producing trees on my own family farm.

When chestnuts are ready, they fall to the ground, usually in September, October and November. Chestnuts are grown in burrs that have to be removed before you get to the shell.

If you can’t find locally grown chestnuts, there are shelled options available, which can also save time when cooking. Shelled options include vacuum-sealed ready to eat, as well as dried chestnuts that require boiling to rehydrate.

To prepare chestnuts in the shell, use a sharp knife and slice an “X” into the concave side of the nut. Cover the nuts with salted boiling water and cook for about 20 minutes. Remove the pan from the heat and remove the nuts one at a time, discarding the shells and inner linings. Another option for preparation includes baking at 400 degrees for about 15-20 minutes with the slit side up.

If you’d like to have “chestnuts roasting on an open fire,” simply make the X and then roast them on a grill pan (a skillet with holes in it). If you don’t make the slits in the chestnuts, they will explode in the fire, so this is a crucial step.

Rice or mash chestnuts, then combine with the following ingredients:

If dressing is too dry, add some of the retained water or more milk. If baked in a casserole rather than stuffed in a turkey, additional moisture will likely be needed. Taste for seasoning before baking, add more salt or pepper if needed.

Bake in a casserole dish at 350 degrees for 45 minutes.

Curried chestnuts are another family favorite. Following my grandmother’s advice, I served this at my first-ever dinner party.

Salt and pepper, to taste

Cook the chopped onions in the butter until they are tender and slightly browned. Remove the pan from the heat and sprinkle the onions with the flour and curry powder together using a sifter or a strainer. Add the tomato puree, apple, chutney and brown sugar. Gradually stir in the water and cook over low heat until the sauce thickens and boils. Season with the nutmeg, salt and pepper to taste.

Prepare the chestnuts as described above.

Arrange the cooked and shelled chestnuts on a buttered baking dish and stir in the curry sauce. Cover the dish tightly and bake for 30 minutes at 350 degrees. Serve with rice or couscous.

If you have the land and would like to plant a chestnut tree, go for it. Chestnut trees are great annual producers. Nolin Nursery in Hart County has many varieties of chestnut trees, with prices ranging from $24-$40. They can be reached at 270-369-8551 or online at www.nolinnursery.com.