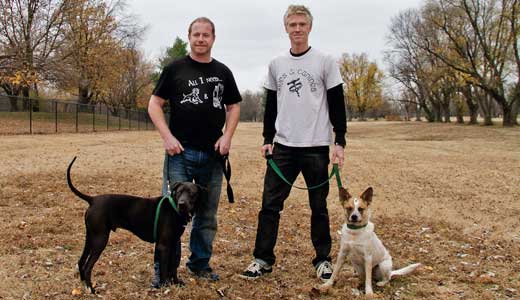 Marc De Michele knows all about the nose of a wine. As a 17-year wine industry veteran (and co-manager at Zanzabar), he’s worked as a wholesaler, importer and wine director at fine dining restaurants, educating staff and devising wine lists to complement the cuisine of various establishments. But he also knows a thing or two about another kind of nose — specifically, the cold, wet kind. As co-owner of Vines & Canines, he and partner Dale Price — who met as classmates at Trinity in the ’80s — bring together their love of wine and dogs and invite like-minded individuals to join them.

What is Vines & Canines?

We just found this affinity with wine lovers and dogs. I do wine education where people invite me into their homes to do wine tastings, and I noticed that their dogs were always front and center. So Vines & Canines is an online store that Dale and I have. We’ve got a number of products for dogs and their people — shirts, wine bottle-shaped dog tags, a line of cocktail napkins, glasses … things like that. The Humane Society gets 10 percent of the proceeds, and we hope to keep this moving along and get the community reinvigorated with wine.

You have tons of restaurant experience, and you co-manage a successful club. Why did you decide to do this?

Restaurant hours are extraordinarily long, and I was looking for an opportunity to be able to spend a lot of time with my daughter (Naia, 2, named after a favorite Spanish vineyard) and still keep two things I really love close to me and run a business I believe in. Dale is kind of in the same boat as me — we’re both single parents, and he wanted to spend time with his son (Eli, 7) and manage a business as well.

I like that I’m in the driver’s seat on the progression or digression of the business — but if things go poorly or wonderfully, it’s due to my decision-making.

What would you improve about the Louisville restaurant scene?

I think Louisville needs more restaurants that are based on the simplicity of cooking. I think we intend to outdo ourselves, and we need to get to the roots of cuisine. A lot of places tend to over-think things a bit; that’s on the wine end, too. But I see some wonderful wine lists coming out, like at The Blind Pig.

Do you like cats, too? Would you entertain a, say, Whiskey & Whiskers for cat lovers?

Some people have said they’d love to see that. I grew up with cats, but without a doubt, my heart belongs to the dogs. (De Michele owns a part-lab, part “who knows” shelter dog, Archie, and Price also has an adopted shelter dog, an Australian shepherd named Aussie.) Right now, dogs are all we can handle, but it’s something we’ve talked about, and it’s definitely a possibility down the line. There’s a lot to go around with dogs.