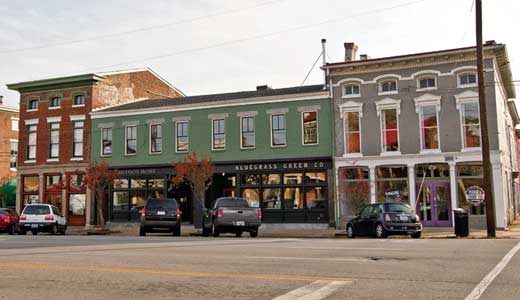 The inside of Muth’s Candies along East Market Street is like a museum, filled with antique plates, old candy boxes and aged photographs from a bygone era.

Founded in 1921 by Rudy Muth, a World War I veteran who ran the business until his death in 1953, the store has been passed down to his descendants. The porcelain sign out front is the original, and in the workshop, employees carefully craft and hand-wrap an array of candies, including caramels, creams and chocolates.

For almost a century, the family-owned business has outlived competitors and survived a depression, a world war and a great flood. Over the years, the Muth family also has seen promising developments in the neighborhood begin, only to fail within a few years, says Martha Vories, Muth’s great-niece who has run the store since 1997. But those past efforts pale in comparison to the transformation currently under way, an entrepreneurial movement along East Market, an area now dubbed the “NuLu” district.

“We’re lucky this neighborhood has started to come back,” she says. “People didn’t want to come down here by themselves for years.”

Located in east downtown where the historic Butchertown and Phoenix Hill neighborhoods meet, the burgeoning area has become home to several art galleries, antique stores, trendy restaurants, architectural firms and other independent businesses. It appears this long-desolate corridor is the site of a brewing renaissance, although the transformation hasn’t been without setbacks.

When the economy tanked a few years ago, many downtown development projects stalled, with pricey condominiums remaining unoccupied. The promise of downtown residents was the linchpin that attracted many investors to the area initially, particularly after the nearby Clarksdale housing complex was razed.

In a one-on-one interview with LEO Weekly earlier this year, Mayor Jerry Abramson said he believes the stagnant downtown housing market will rebound, and that buyers eventually will show a renewed interest in urban condominiums that, as of now, remain largely vacant.

In 2006, Legacy Lofts, a five-story, 38-unit condo complex, was heralded as a sign of returning downtown residents. But soon after it was announced, developers hit financial and legal troubles and were forced to abandon the project.

Similar housing projects in the works around NuLu froze, and business owners worried that they had built unique storefronts for people who would not come. Even longtime businesses like Muth’s were concerned.

“All this new housing was the reason everyone thought it was going to be so huge,” Vories says. “What I hated to see was when everything crashed and all of it stood still. There have been so many places that have open and shut over the past three years, it breaks your heart, because by now this area would have exploded.”

Although the recession undoubtedly affected NuLu’s momentum, the district’s biggest cheerleaders believe the movement is set to reignite.

“I don’t think anybody or any place is invincible to the national economy, but (NuLu) is still a growing area,” says Lisa Weps, co-owner of Toast, a breakfast and lunch restaurant on East Market. “This place is special to a lot of people. There are so many up-and-coming entrepreneurs, and people are really excited about this area still.”

The departure of Wayside Christian Mission from its building on the 800 block of East Market Street has spurred at least three new businesses to set up shop in the past two months. And local boosters point to the success of this year’s NuLu Festival — a one-day event that organizers say drew at least 2,000 people — calling it a sort of show and tell for prospective residents.

“People moving downtown would definitely help things. The more people who can live, work and play all in one central area would improve things on this end definitely,” Weps says. “But we have a lot of our clientele who are flocking in from out of town and other markets such as the Frankfort Avenue and Bardstown Road area. I think we’re set for a big push.”

But some NuLu supporters aren’t counting on the arrival of downtown residents to make or break the area, adding that the district is about more than making money.

Asked if the district can live up to all the hype, Chef Jayson Lewellyn, owner of 732 Social, an eco-conscious restaurant that serves seasonal food, was candid about what he calls “a movement.”

“I’m not hopeful,” he says, “I know it’s going to happen. Somebody had to break ground, and this is larger than one business. It’s about us, really. The business owners down here are committed to breaking the mold and bringing people back to urban living. But it’s going to take time for people to catch up.”

For Lewellyn, NuLu is a movement that embodies the message of sustainable living, and the district’s crown jewel is the Green Building.

Originally built in 1891, the building was renovated by local filmmaker and businessman Gill Holland, along with his wife, Augusta. The couple transformed the structure, making it an environmentally conscious building that includes 732 Social, office space, a record label and multiple event rooms. In an interview with LEO last week, Holland confirmed that they have received LEED Platinum Certification, making the Green Building the first commercial building in Kentucky to achieve that goal.

The business leader believes the area is now primed to pick up where it left off before the recession.

“A lot of things didn’t go as fast as they could or would have, but things are moving methodically forward,” Holland says. “I feel this was the one area of town that kept momentum during the last two years. Maybe it wasn’t full speed ahead, but it was still speeding ahead.”

Holland notes that the euphoria in the district is due to more than just his award-winning renovation project, and he credits the businesses and neighborhood association’s strength as a group. Successful networking has educated people about the importance of supporting local and family-owned businesses.

Still, much of NuLu’s prospects will be measured by the success of the housing market, which remains a yardstick for downtown Louisville’s overall progress.

After the Legacy Lofts development changed ownership, it was renamed SoHo Lofts, and the project has since been re-launched by Will Realty.

Earlier this year, the family-owned company bought the unfinished project at a foreclosure auction for just under $1.9 million. In October, the company hosted an open house that welcomed prospective residents in conjunction with the NuLu Festival.

The developers say the newly constructed lofts offer affordable and “eco-chic” condos in a growing and vibrant neighborhood where residents will appreciate energy-efficient perks like geothermal heating and cooling and Energy Star-rated appliances.

The condominiums at the SoHo site are significantly cheaper than the original Legacy Lofts, but remain out of the price range for many urban professionals who could anchor the neighborhood’s businesses. The cheapest SoHo unit is $95,000 for a one bedroom, with prices rising to $374,000.

The Wills hope to have the building completed before the end of the year and ready for occupancy by Jan. 1. Like surrounding business owners, they are hopeful that the stagnant housing market will turn around and that NuLu will continue to blossom.