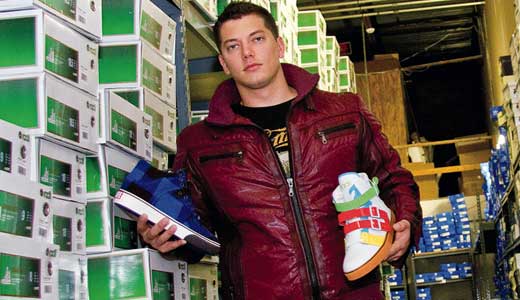 While most teenagers work mall jobs and beg for an allowance to buy the finer gadgets in life, Matt Kubancik took another route. As a teen working retail at American Eagle, he bought the entire clearance rack once and resold the clothes on eBay, making an incredible profit, which planted the DIY seeds in the young entrepreneur. Now he owns Street Moda Footwear Group (www.streetmoda.com), which was named one of the year’s top-five fastest-growing independent and privately owned companies in Louisville by Business First. Kubancik, 24, operates the online business out of a warehouse in the East End and employs more than 30 people.

Street Moda sells popular, urban and hard-to-find brands of shoes, clothing and accessories at a discount. Think Ed Hardy, Rocket Dog and Lucchese boots. Kubancik started it in 2005 at the age of 18. The cutting-edge retail site offers authentic brand names at 50-80-percent off.

Although his online business has been successful for years, he tried his hand at retail last year, opening a storefront in the Highlands. While it didn’t last, the lessons he learned will. “It humbled me,” he says. “I was a little arrogant, honestly. I thought I could do anything due to the amount of success I had. It made me realize I’m lucky to be doing what I’m doing and have the success I’ve had.”

Where did you come up with the idea for starting Street Moda?

The idea came to me during my years of selling goods online. I was passionate about fashion and street clothing, so I combined my two interests together and started to build a company.

What were you doing before you decided to take the leap?

I started a few online ventures when I was 13, so I was very much always an entrepreneur, but I worked part-time at different fast-food jobs and at Bonefish Grill to help pay the bills.

What was your backup plan?

I really didn’t have a backup plan. I’m an entrepreneur, and I rolled the dice. I’ve been lucky so far.

What do you like the best about owning your own business?

What does Louisville need more of?

Non-chain Italian restaurants like the ones located on the East Coast — and iconic retailers.