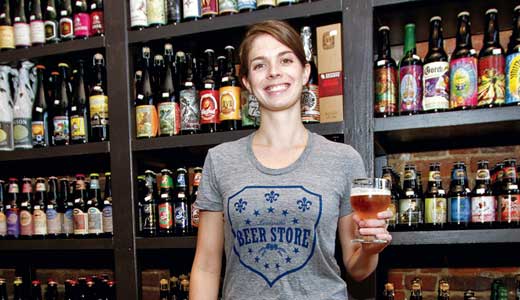 “Something’s happening,” says Lori Beck. “Something’s happening right now.” Sure, Beck, the 20-something co-owner of the Louisville Beer Store is talking about the buzz that has built her nascent business into a hotspot. But she’s also talking about a set of tastes and priorities that have galvanized both her city and generation. “There’s a whole new mentality, a way of life, that encourages people to follow their dreams and passions and not settle for a 9-to-5.”

This “new mentality” has benefited Beck and others in Louisville’s craft brew scene. And make no mistake, the scene is having a moment. Though Kentucky was late to the game (47th out of 50 states for craft breweries per capita), it’s closing ground, with craft brew sales up 17 percent in the state this year; the majority of these are from Louisville. National craft brew sales are up 13 percent even as total beer sales are flat.

Positive signs abound for Louisville’s beer barons. Beck’s store is thriving, and she and partner/boyfriend Tyler Trotter will open a second location this winter. Meanwhile, the venerable Bluegrass Brewing Company just opened a $1.5 million beer temple across the street from the new KFC Yum! Center. At the same time, easygoing Cumberland Brews increased its beer-making capacity by a factor of seven over the past few years, while across the Ohio, the New Albanian Brewing Company opened a second location (Bank Street Brewhouse) in March 2009. There also is a bubbling homebrew scene, epitomized by supply store My Old Kentucky Homebrew.

First, though, what is a craft brewery? According to the Brewers Association trade group, American craft brewers are small, independently owned and traditional. (Small means fewer than 2 million barrels sold per year.) This means locally made and owned beers with better ingredients than you’ll find in a can of Natural Light. Think of it as the foamy side of the foodie movement.

Certainly the Louisville Beer Store benefited from the buzz. Though open less than a year, Beck’s craft beer-centric store has thrived. And though she declined to give dollar figures, she says sales are “far beyond” where she expected they would be, and they are already one of the largest beer buyers in Kentucky. The store also has 1,850 Facebook fans and sells scores of distinctive T-shirts to help spread the love.

Why has Louisville’s beer scene reached critical mass now? One reason is these businesses are reaping the benefits of years of groundwork in the form of beer tastings, education and “Keep Louisville Weird”-style consumer activism. Another is Louisville itself has become a nexus for artists and others drawn by the city’s bohemian vibe and affordability. Priced out of New York and Chicago, they come here and bring their palettes with them.

If the Louisville Beer Store represents the vanguard of the scene, the Bluegrass Brewing Company is easily the biggest name. Established in 1993, the company has come to symbolize, for many, what craft brewing in Louisville is all about: good local beer served in a homey atmosphere.

Of course, the big news at BBC these days is its new, multi-story brewpub downtown. Owner Pat Hagan says that with this new building, the number of firm employees will double from 75 to 150. The BBC is able to finance this venture because it’s seen sales and profits rise 15-20 percent for four of the past five years. (Last year, however, sales rose 5-10 percent.)

Hagan says the BBC and its peer firms have, over the years, spread the gospel via promotions and events. For example, late September saw the first-ever “Louisville Craft Beer Week,” which kicked off with a Cask Ale Fest at the St. Matthews BBC location. There was also a beer brunch at the Bank Street Brewhouse and a beer-and-cheese tasting at Sergio’s World Beers. “People are starting to buy more local products and want to support local companies, which is what craft breweries are,” Hagan says.

In New Albany, the New Albanian Brewing Company also completed a recent expansion and has seen sales volume explode. Since brewing began at the second location in August 2009, the brewery’s output rose from 400 barrels annually to 1,600. So far, the increase in volume has not entirely covered the $900,000 cost of the new spot, but sales have still increased 25 percent to $2 million in the most recent fiscal year against the year prior. As for profits, there were none this year or last, as its all sunk back into the business.

Owner Roger Baylor sees the roots of today’s success in the work done by many in the 1990s, when bars like his, BBC, Cumberland and the O’Shea’s pubs all began to push local products. Now that such headway has been made, he believes Louisville is primed for further growth, with fantastic dining and independent music scenes to boot. “Louisville sits astride the Mason-Dixon Line, and that still means something,” Baylor says. “People are still fairly nice most of the time, and that’s helpful when it comes to ‘people’ businesses like eating and drinking.”

Cumberland Brews also has expanded within the past few years. Specifically, in 2007, owner Mark Allgeier started to brew offsite, increasing his capacity by 80 percent. At the same time, sales have risen from 357 barrels sold three years ago to 963 sold last year, an increase of 169 percent. Allgeier says the demand for better beer is part of the growing discernment in the 25-45-year-old demographic, which entails demanding better versions of not just beer, but everything. “That bar is being raised,” he says.

Even as BBC and the Louisville Beer Store experience rapid growth, Cumberland ambles along at a more leisurely pace. Sales are up from 5-10 percent from three years ago, although they have been flat over the past year. Allgeier tries to put a happy face on the news. “I don’t consider them flat, I consider them steady-as-they-go.”

Though there is a lot of growth taking place in the craft brew world, Allgeier is in no rush to follow suit. He’s not afraid of success, but his definition of it is not the traditional one. For him, the worst result would be expansion at the cost of Cumberland’s soul. “I like what I do, and I like the size of Cumberland,” he says. “You hear about so many places that are not as good as they used to be. I never want to hear that.”

This means Cumberland is unlikely to change too much as the coming craft beer wave manifests, which is fine by Allgeier. This is also consistent with the beer-centric ethos that first drove him into the business. “I don’t look at this as an investment opportunity,” he says. “If you’re in the brewing industry for that, it will come back to haunt you.”