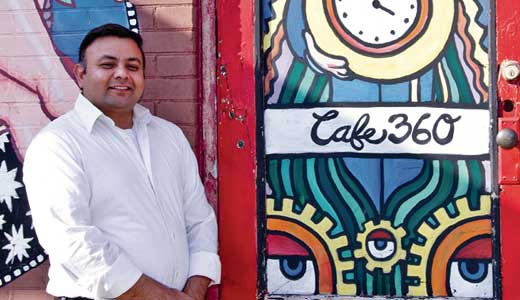 And they said it wouldn’t last. The building at the northwest corner of Bardstown and Bonnycastle in the Highlands has been a lot of things in its 90 years, but in recent times, the space at 1582 Bardstown Road has hosted a spate of restaurants, many lasting only a month or two. But Sanjay Taxak’s mix of eclectic cuisine and the only hookah lounge for miles around has kept Café 360 open 24 hours a day since 2006.

Why a hookah bar?

Louisville is such a diverse, rich place for Kentucky, but not many people locally knew what it was. The hookah originated in India, but it moved to the Middle East and is more of a symbol there than in India. We smoke hookah, but it’s not a fancy pipe. Growing up in India, I saw a similar kind of hookah places, and when I opened the café, nobody here even knew what they were.

The smoking ban went into effect in 2007, shortly after you opened. How do you handle this?

One thing is we use herbal, non-tobacco products inside; outside it’s tobacco. Second, we make our own tobacco, so we have an exemption. If you make your own tobacco and you sell it, you can use the facility like mine. We buy the tobacco leaves, cure them, and add the flavorings and herbs and stuff, all in very small batches. We don’t retail it; it’s just for the café only.

Why do you think Café 360 has lasted?

To be honest, a lot of my friends said, “Do not invest in this building,” and I said, “I want to prove it’s more the way you run a business and not the building.” I had a business plan that I wanted to do it this way and stick to it. Customer satisfaction and diversity is the key. The menu is huge and priced right, and it’s open 24 hours. Everybody loves the food, and there’s a full bar. I was confident it would work out, but I didn’t have any backup plan.

The hookah is a big draw. I think there is not a single university on the East Coast from which the students have not come. We have seen IDs from Florida, New York, Tennessee, Chicago and everywhere else.

I get a really good feeling making this business successful, as everyone knows it’s a jinxed building. The worst is, it’s a crazy place at night. A lot of customers get excited and kind of destroy the place a little bit. Tables and chairs get ripped, and there’s a lot of writing in the bathroom. It’s really high maintenance.

Do you think Café 360 will be the only place of its kind for a long time?

Forever! The history this place has created — nobody can replicate that, no way. It’s very, very atmospheric, and it’ll keep on growing. To replicate that will be next to impossible. For Louisville, it’s a big part of the town.