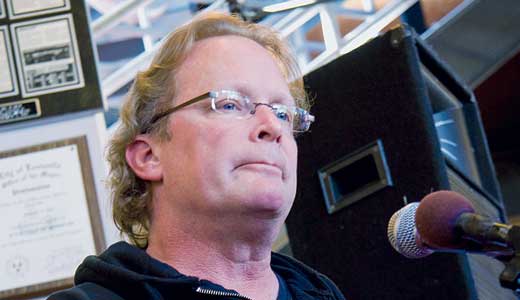 ear X-tacy owner John Timmons has plenty of supporters. Judging from the online response to last week’s YouTube plea for more business, he’s got plenty of critics, too.

While the iconic local record store’s Facebook invite, titled “It’s Now Or Never,” prompted a torrent of well-wishes, a growing number of customers say they’re fed up, describing Timmons as a nostalgia-driven panhandler who hasn’t accepted realities of the music business in the digital age. Timmons, whose store celebrated 25 years of operation this August, isn’t giving up yet, nor is he surprised by the adverse reaction.

LEO Weekly: How long after your recent move did you suspect that ear X-tacy might face yet another financial crisis? What were the indicators?

John Timmons: We were never out of the financial crisis. It’s been with us all year, actually longer. The decision to move the store and stay open was based on the assumption that we would continue to do the same amount of business we were doing at the past location, combined with substantially reduced rent at the new spot that gave me hope that we could make it all work. I still believe it can. It will.

LEO: In your estimation, how much of an increase in sales does ear X-tacy need to see, and over what period of time, in order to stay open?

JT: With the move, our business dropped anywhere from 35 to 50 percent. Obviously the move had an impact for whatever reasons. Every time I’ve moved the store (this is our fourth location on Bardstown Road) there have been both positive and negative comments about why and where we’ve moved to. The heart and soul of this store has never changed, just the addresses have. The economy has taken its toll on everyone, consumers and small businesses. If we can regain the business that we were doing at the old location, we’d be fine within a year, in my estimation. It’s not a goal that can’t be reached.

LEO: Did you expect some backlash for making a second public appeal?

JT: Absolutely. We saw it the first time, and I knew that this time would be much worse. I reminded myself and the staff that the reason we went ahead with posting the video was that this is for our customers’ sake. I truly feel they need to know how it’s going. The protests will always be there, I know that. I would imagine there would be a worse backlash if I just closed the store without bringing this up again. There’s always been the “public perception” of ear X-tacy and the reality. Rarely do they match up in my mind. We have always strived to be the best store we can possibly be, and that has not changed. I do take to heart all the negative comments as well as the positive. The constructive complaints help us be that better store.

LEO: Customer complaints on ear X-tacy’s Facebook invite center on a few different topics, but one of them is that the store prices its records too high. What costs do you factor in when you set the price that’s on the sticker?

JT: The actual cost of the music, the cost of stocking deep catalog and non-mainstream titles. Price perception has been skewed by the mass-merchants who use music as a loss-leader to drive traffic to their stores and make money by selling you something they actually do make money on: computers, tires, diapers, etc. ear X-tacy is a record store. Music is our bread and butter. It’s also impossible to compete with the notion that music should be free. It’s not. We do try to keep prices as low as possible and still stay in business. The cost of actually having someone on staff who is truly passionate and knowledgeable about music, rather than just someone to ring the register and take your money.

LEO: What additional revenue streams have been discussed in the store’s focus group meetings to try to keep ear X-tacy financially viable?

JT: We’ve been taking a lot of good suggestions from customers as to how to keep the store financially viable. Bringing in additional types of merchandise that would fit our demographic to utilizing the space as a true music venue, coffee/wine bar etc. ear X-tacy will always be mainly about the music. That’s where our passion lies. Without music, there’s no ear X-tacy. We will find the right combination that will make this work. Despite what many might think, ear X-tacy is not here exclusively to make money. Yes, I do have to pay the bills, but it’s still all about music, supporting the local music community, discovering new artists, learning from customers as well as sharing with them.

LEO: The Coalition of Independent Music Stores formally launched Think Indie’s digital operation in 2009, six years after the advent of iTunes. Why did it take CIMS that long to respond to the growing proliferation of digital music? Do you think indie record stores could have, and should have, responded sooner?

JT: People don’t realize the cost of getting in the digital game. Our coalition has spent about a quarter of a million dollars to be able to build a site, acquire the content, which is not free, negotiate contracts with each distribution company and/or label to meet their criteria, host all the content, etc. iTunes makes their money from all the great gadgets we buy from them. Music is not the moneymaker for them. Digital music is another format we offer to our customers.

LEO: Landlocked Music (in Bloomington, Ind.) weighed in on your video recently, saying they too feel the economic pinch. What research has the coalition done on how to keep its member stores healthy?

JT: It’s affected all independent businesses, not just our one store. Ask any independent business owner how they’re doing. I feel it’s best to be honest with the people who have an interest in this store: our customers. Those who see my video as a sort of sleazy advertisement miss my true intent here. I believe the people that support us and want us to continue to survive would prefer the truth rather than come to us one day and find the doors permanently locked. It’s the reality that a lot of independent businesses face.

LEO: In hindsight, do you regret staying in the Highlands?

LEO: What tangible benefits do ear X-tacy provide Louisville musicians who now have the ability to distribute their music themselves through their own websites and digital services like Tunecore and Bandcamp?

JT: In the past we (ear X the label) funded artists’ projects, helped them release their albums, cassettes, 45s and CDs. ear X was the first store that aggressively went to local artists to get their music in our stores. I still see the need for stores like this that champion the hometown bands, sell their art and give them a place to perform for people for free.

LEO: Where do you shop locally?

JT: First and foremost, I shop/dine at local establishments. Yes, I shop at Kroger sometimes, but do my best to give my dollars to Valu-Market … on down the line. No, I’m not perfect, but I do make a conscious effort where I spend my money.

LEO: Some Louisville musicians have weighed in on Facebook about the delay in being paid for records they consign with ear X-tacy. How does the consignment policy work?

JT: Artists bring us their work; we stock it on a consignment basis. They set the cost price, we mark it up marginally, and when we sell through that initial shipment, they are to be paid for the sales. It doesn’t always work as well as I’d like it to. The criticism is right on, and I am the one to blame. Our consignment manager Sean Bailey does a fantastic job of accommodating local artists in getting their music in our store. If there’s anyone to blame for the delay in getting payments to artists, it’s me.

Every day, I have to evaluate just how much cash we have to pay out to consignment sales. When times were good, we were much more timely. As business has tightened up, it comes down to paying the rent, keeping the lights on and doors open. When we have available cash, Sean gets payment to the artist. I figure it’s better to be a slow-pay than a no-pay. ear X has never not paid an artist for sales. I will see to it that everyone gets paid. Major-label payments take a backseat to paying Louisville artists. Again, I’ll take full blame for the slow pay. Sean does the best job he can, given cash flow and me signing the checks.

LEO: You’re on the board of Keep Louisville Weird. How unique are ear X-tacy’s financial obstacles and challenges as opposed to those of other local businesses?

JT: We’re pretty much all in the same boat. If people have no money to spend on music … that’s a problem. While our video plea pertains to ear X-tacy, it applies to all independent businesses. Imagine Louisville as nothing but chain-store/big box mecca. Anywhere USA.

LEO: Is it possible that the traditional model of a brick-and-mortar record store is dead?

JT: It’s certainly not the healthiest it’s ever been, but I truly believe it’s not dead. The music business and traditional record stores have always been changing, although now it’s at a much faster rate. The increase in the vinyl business is the growth area for us right now. It defies the “everything is going digital” mentality. CDs may be going away, but I truly believe there will always be the need for a physical format. If I didn’t believe that there’s a need in communities for independent stores like ear X-tacy, I’d quit putting my life into this.

I’d also like to add that we do read all the comments, both positive and negative, and take them to heart. I’m really blown away by how passionate people are over what I see as just a little record store. We’ve been listening a lot closer to what people have been saying and suggesting since the February press conference, and conducted a pretty extensive customer survey the last few months. My goal for ear X-tacy since day one has been to strive to be the best record store we can be. We’re not there yet, but believe me, we keep that goal in mind every day.