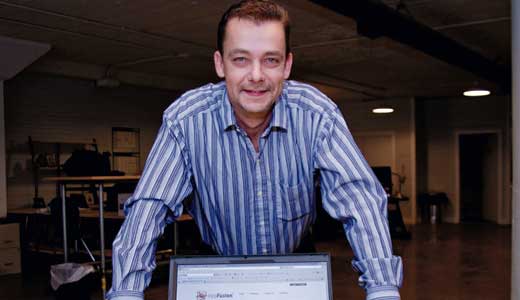 Who would Justin Bieber be without his freshly shampooed swoopy bangs? Let’s hope we never have to find out. It’s been said more than once that his ’do makes him look like a very cute lesbian, but what would you, your grandma or your dog look like with “The Bieber”? You had to know this was coming. Yes, there’s an app for that — “BieberHair.” It was conjured up by Bob Henzel and his cronies at iBroomCloset, a new Louisville company that creates fun applications for mobile devices. Don’t worry — that’s not all these people use their tech skills to create. They have a company for “normal,” business-centered apps, too — iAppFusion. Henzel is an economist with more than 20 years of experience in market research and data modeling.

How did these businesses come about?

Me and a couple of colleagues — we are definitely data-centric people. IT people who are used to heavy-lifting the analytics were getting together and saying, “You know, we should be making it like this, developing our internal structure like this, so we can actually make money out there by providing services.” So that’s how it all started. We were saying that we want to really attack the corporate side, but at the same time, we don’t want to just ignore the fun side, so we started iAppFusion and iBroomCloset, and built it such that every application we’re making in one, we make pieces of it for the other. And as more of our friends got involved, it became a legitimate company, and we just have a blast doing it. It’s just so much fun — we don’t even consider it work at this point.

Have you always wanted to own your own business, or did this just kind of happen?

I’ve always been an entrepreneur. I’ve had businesses before in different parts of the country. They weren’t really what I loved to do — just more of a necessity. This just kind of happened, and it’s an awesome experience. I have nothing but respect and admiration for my partners. If you were ever at one of our meetings, you would be laughing more than you’d be doing anything else.

How much time do your app companies take up?

The answer is yes — however much you can give to us. There are 168 hours in the week. You have to pick which ones you work, sleep and play. It takes every bit of time that we can spare to put everything together — you can never get enough done.

Did you have a backup plan?

The backup plan was one or the other, the iAppFusion or the iBroomCloset. This was kind of the first month, and we’ve had thousands and thousands of downloads — we didn’t realize BieberHair would actually be that big, but it was.

What do you like best about owning your own business?

It’s the hardest job you’ll ever love. It’s being an entrepreneur, being able to make those decisions you know are correct — you know that’s going to take hard work, but you know you’re going to get rewards.

It’s the longest job you’ll ever learn to hate.

What does Louisville need more of?

Louisville needs more people who are not going to believe it’s all dour and glum with the economy. There are places to really shine and flourish. It’s innovation that’s really going to help us get out of this recession.