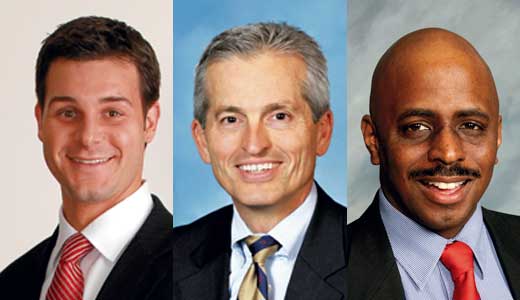 Bye-bye, Doug
In the closely watched race for the 25th District, Democrat David Yates unseated Republican incumbent Doug Hawkins by 51 to 49 percent. The campaign was a nasty back and forth, with Yates pummeling the controversial Hawkins in a number of hard-hitting mailers. In one piece, Yates’ campaign called Hawkins unethical, ineffective, un-American and an extremist while highlighting his voting record.

“It was all about his record,” Yates says. “Right now, if you look at most of the council votes, it was 25-to-1. For years on major votes, the only outside member wasn’t the Republican Party, it was really just Hawkins.”

In the closing days of this year’s campaign, Yates levied more accusations, alleging that Hawkins was behind a series of robocalls that referred to Yates as a liberal who supported “militant lesbians” and attacking his faith. A day before the polls opened, Yates blamed Hawkins for 300 missing yard signs and filed a report with Louisville Metro Police.

In a LEO interview, Hawkins denied those charges. Asked if his voting record and controversial stances had caught up with him, Hawkins blamed his loss on Yates’ negative campaigning.

Registry numbers showed that Yates spent more than Hawkins had raised for the entire general election.

The victory marks the first time voters have unseated an elected council member. When he is sworn in next year, Yates, 30, a union lawyer, will become the youngest member of the council and the first one born in the 1980s. Those are distinctions the fresh-faced Democrat notes when speaking to reporters, and he says he wants his office to be a voice for young people in Louisville and inside Metro government.

King James
In the 6th District, Democrat David James beat independent incumbent Deonte Hollowell, who was appointed by the council earlier this year after to fill the seat left after the death of George Unseld.

“Now the election is over, we all want what’s best for our city. And I think we as Democrats are going to work with our Republican counterparts, each other and our new mayor to get great things done for our city,” says James, who will take office before the new year once the election is certified. “It’s a new day.”

Those two pick-ups give Democrats a 17-seat majority, which is almost veto-proof. A Democratic caucus that sticks together could not only dominate the council’s agenda but also wield tremendous influence over an incoming mayor with little government experience.

Miller’s crossing
For council Republicans who have been in the minority since merger, getting their agenda items passed will be tougher with Abramson leaving office. Incoming 19th District councilman-elect Jerry T. Miller says the silver lining will be a chance to work with Fischer, whose platform shared some similarities with his opponent, outgoing councilman Hal Heiner.

“This offers us an opportunity to work with mayor-elect Fischer, because many of the things he said and supported were very similar to those ideas advanced by Hal Heiner in his campaign,” says Miller, who beat Democratic opponent Justin Chelf to keep Heiner’s seat in the GOP. “We all agree jobs and opportunity is the number one challenge for Metro government. I believe mayor-elect Fischer has presented himself as an independent individual who isn’t necessarily beholden to a party or the decisions of the past. And I certainly will take him at his word and offer to work with him.”