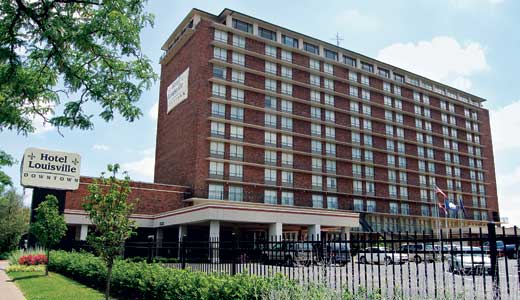 After repeatedly kicking Louisville’s homeless in the gut, the city has agreed to pay Wayside Christian Mission $145,000, admitting Metro officials erred when they refused to permit the shelter to relocate hundreds of women and children to the former Mercy Academy building on
East Broadway.

“We feel they’re finally correcting the situation,” says Nina Moseley, Wayside’s chief operating officer. “So overall, we’re very pleased with this resolution and can now turn our attention to taking care of people without wrestling with these power structures.”

Last week, Mayor Jerry Abramson signed a conciliation agreement approved by federal housing officials to compensate the nonprofit. The settlement was the result of Wayside’s accusation that the city violated the Fair Housing Act upon blocking their move to the Mercy site.

Although the city denies having discriminated against Wayside, zoning officials will be required to go through fair-housing training related to zoning policies.

“What we learned out of this two-year issue was that there was a lack of clarity in how to determine appropriate locations for homeless shelters,” says mayoral spokesman Chad Carlton. “It just had not been an issue that had risen to this level in recent years, and when the controversy erupted after the Mercy decision, the mayor stepped in and put together a group and pulled in all parties involved. In hindsight, it’s easy to say something could have been done to resolve the matter short of this.”

During the controversy’s initial rumblings, however, the mayor didn’t take a definitive public position despite Wayside’s pleas. And his absence was noticed during the nonprofit’s attempts to get public support for the move.

“We sent a 22-page packet to Mayor Abramson and asked for his support in October 2008,” Moseley says. “And he never even responded or acknowledged he got it. If we had one peep of support we could have moved in and dealt with the fallout later.”

In 2008, Wayside attempted to buy the abandoned Mercy property, which is located in the Original Highlands, with plans to turn the campus into a
family shelter.

At the time, many city officials and residents vehemently opposed the move. The Original Highlands Neighborhood Association spearheaded that opposition, dubbing it a “mega-shelter” that was inappropriate for the mostly residential area.

Eventually, Wayside asked Metro Planning and Design to weigh in, and the department determined a shelter was an appropriate use for the site. But the neighborhood association appealed the ruling, and the Metro Board of Zoning Adjustments ultimately forced Wayside to abandon its quest to operate at Mercy.

Looking for a new location, Wayside successfully bid on the Hotel Louisville last year, with a plan to turn the 287-room building into a family shelter. But city officials tried to block that site as well, saying Wayside had to wait until the council approved new zoning regulations that addressed homeless shelters.

Rather than wait for a decision, Wayside sidestepped the city and began running the facility as a penny-per-night hotel for the homeless, which some Metro officials called a “publicity stunt.” Regardless, the move was successful, and the shelter continues to operate at the hotel.

After months of meetings, a homeless task force finalized the ground rules for shelters in the city’s zoning regulations, and the council approved the guidelines earlier this month. After a two-year battle with the city, Wayside’s leadership hopes that will prevent any future roadblocks.

“The agreement and the new zoning rules say to Louisville’s homeless that the city must recognize that they are citizens and that they must be treated as such,” Moseley says. “And now no homeless shelter will have to go through what we went through.”

The debate over the utility of the Jefferson County judge-executive post may reignite now that state Rep. Bill Farmer, R-Lexington, has pre-filed a measure to eliminate the position for merged governments.

“Now that we have one government in Lexington, why do we need this position that draws a paycheck, gets health insurance benefits and receives retirement benefits?” Farmer says. “They’re wasting government money.”

The bill proposes a constitutional amendment that would likely be on the statewide ballot in 2012, and if approved by voters it would abolish the seat in merged governments. In Kentucky, that would only affect Louisville-Jefferson County and Lexington-Fayette County, leaving the seat in the other 118 counties.

Since city and county governments merged here in 2003, many in Jefferson County have questioned the need for a judge-executive. Before merger, the office entailed a number of responsibilities as chief administrator, but today it is mostly a ceremonial role with most of its powers shifted to the mayor.

“Well,” he says, “technically, nothing.”

But having just won the job, Matthews opposes Farmer’s bill, and he believes he can have an impact addressing other issues in the county that the mayor has overlooked, such as revitalizing the Jefferson Memorial Forest.

“There are areas of the county still underrepresented by Metro government,” Matthews says. “I don’t think this amendment is really worth the legislature’s time. It’s so insignificant. And it’s a short legislative session where more important things than this should be pushed.”

In Lexington, however, Matthew’s counterpart, Fayette County Judge-Executive-elect Jon Larson, supports the measure and ran on a platform to scrap the seat, beating a 30-year incumbent in the process.

After a brief debate over service quality and lack of competition, a Metro Council committee unanimously approved the city’s 15-year franchise agreement with Insight Communications.

Last week, the Transportation and Public Works committee voted to renew the cable and Internet service provider’s exclusive contract with Metro government, which among other things requires Insight to carry Metro TV on their basic cable package and forces rival cable companies to pay for and lay their own transmission and data lines.

“There is no immediate or direct competition in terms of a cable company that you can get right now,” says Councilman James Peden, R-23, who challenged Insight officials’ claims regarding competition and pricing during the meeting. “Other options are there, but it forces you to upgrade essentially.”

When questioned by committee members about the supposed lack of competition, Insight attorney Larry Zielke said that is a misconception. Asked if the agreement gives Insight a monopoly in the city, Zielke said no, adding that other cable providers can operate under separate franchise agreements.

The public was encouraged to attend the hearing to potentially spur amendments to the agreement, but the committee meeting was scheduled at 3 p.m., an unfavorable time for average citizens.

As a result, only four people signed up to speak; three of them were Insight employees who bragged about the company’s service.