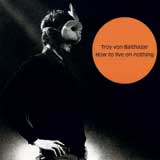 Writer and former guitarist and frontman of the gritty, ’90s heavy group Chokebore sheds any tag of aggression on his solo outing How To Live On Nothing. Balthazar has been refining his tactics for years on previous solo EPs primarily in Europe. In long form, shades of Andrew Bird — a similarity that might hit too close to the bone considering Balthazar performs live with loops — Sparklehorse and California pop are but a few of the tactics Balthazar employs. Abrasive vibrato guitar and distorted lyrics on “Santiago” bear a few resemblances to the Deal sisters. The campfire sing-alongs “Communicate” and “Infinity Face” range from George Harrison to total Imagine-era John Lennon, while “Wings” finds the singer engaged as an intimate, near-androgynous confessor.