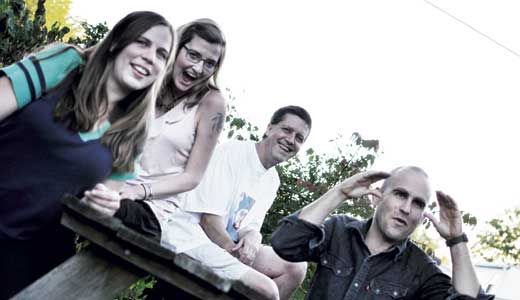 Minnow, the five-year-old punk-rock supergroup featuring Rob Pennington (Endpoint, By the Grace of God), Douglas Maxson (Your Food, The Dickbrains), Carrie Neumayer (Second Story Man) and Rebecca Lindsay (Red Nails) release a new album, Hello Hubris, on Nov. 20 via Noise Pollution. Maxson, a bit of an anti-guitarist who wrote most of the music for this album, describes it as “edgier and dirtier.” “I banished the clean channels from my amp,” he says. “I was consciously thinking of what John Bailey would do in Your Food. How to make interesting music without being much of a musician.”

As a document, Hello Hubris is bittersweet: The group’s all-ages record-release show, also Nov. 20 at Skull Alley ($5, 7:30 p.m.), will be its last. Lindsay, Pennington’s wife, has lupus and is concentrating on her health.

“It was primarily a decision on Becca’s part, because her lupus has gotten worse over the past couple of years, and she could no longer drum the way she wants to drum for Minnow,” Maxson says.

Sitting in for Lindsay is Forrest Kuhn. Kuhn played drums on Sunspring’s 1993 album Poppy, on two songs from their posthumous 1994 compendium, Orange, and on Severance Pays, the 2007 album from Black Cross, which also features Pennington and Coliseum singer and guitarist Ryan Patterson.

Meanwhile, Maxson is playing guitar in a new project, Hal Dolls, with guitarist Erin Fitzgerald and drummer Matt Whitaker. The group recorded an album for Noise Pollution last December at Studio K with Trip Barriger. Two songs, “Bushwhacked” and “Barbie,” are up now at www.myspace.com/haldolls.

One Gallant
Adam Haworth Stephens (www.adamhstephens.com) steps aside from his day job in Two Gallants to open for Felice Brothers tonight at Headliners ($15, 8 p.m.). Stephens released his solo debut, We Live On Cliffs, on Sept. 28 via Saddle Creek. The album was produced by Joe Chicarelli, who also produced My Morning Jacket’s Evil Urges; MMJ drummer Patrick Hallahan and keyboardist Bo Koster also appear on the album, along with Joey Waronker (R.E.M., Smashing Pumpkins).

Music Cast
Seluah (www.last.fm/music/seluah) reunites for a rare performance Thursday, Nov. 18, at Zanzabar, and Ed Grimes stops by to talk about the band, as well as spin some material from the EP. Listen at Bluegrass Catastrophe, bluecat.leoweekly.com.