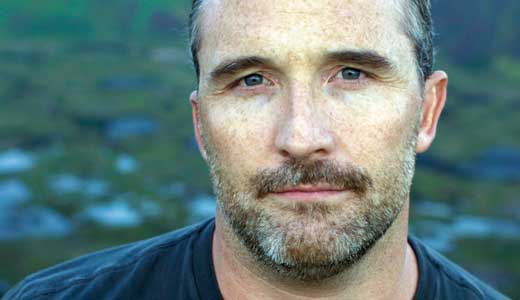 “Circus,” a six-part documentary series that spends a year with the Big Apple Circus, debuts Wednesday night on PBS. The films profile a host of compelling characters, from a dangerously imbalanced stagehand to a once homeless, middle-aged clown about to make his circus debut.

Jeff Dupre, an Emmy Award-winning producer and Louisville native, spoke with LEO Weekly about the series, which he co-created with producing partner Maro Chermayeff.

LEO: The ways we entertain ourselves have changed a lot over the past century, yet the circus goes on, pretty much as it always has. Why has it endured?
Jeff Dupre: The really powerful thing about the circus is, it’s real and happening right in front of you. So much of our entertainment today is virtual — video games and movies are all comprised of graphics and things that aren’t real. So, for a kid who’s been sitting around playing his X-Box, it’s like, this is life! People are doing incredible things, and it’s not some trick in a computer. You can’t fake a triple somersault.

LEO: I’m guessing that no matter how much you prepare yourself for a run with the circus, you’re going to encounter the unexpected.
JD: The beauty and terror of making a documentary film is that you don’t know what’s going to happen. So, that’s a saving grace, but it’s also like, well maybe nothing’s going to happen. You go for weeks living on this lot and have already seen the show like 500 times, and you keep wondering if anything is going to happen. But things did happen. One of the guys we were following reportedly called in a bomb threat. Grandma the Clown (Barry Lubin) gets diagnosed with cancer a few weeks into the shoot, and then, of course, the charming and wonderful flying act from Brazil can’t catch their tricks. There was Glen Heroy (a newbie clown) who we fell in love with on the first day, and suddenly we were like, is he going to be able to pull this off?

LEO: Talk about your filming process. You were living in the camp with the circus?
JD: Yeah, we had our own trailers on the lot — an office trailer, an Airstream and 10 or 12 filmmakers. That’s part of our process. We become part of their world. We’re just part of the scenery. When you have the opportunity to spend that much time with your subjects, you’re able to capture them as they really are. It’s not like we’re coming in and shooting for a couple of days. We shot over a 1,000 hours in the course of a year. We got to see the action unfold in real time.

LEO: Did you encounter any resistance?
JD: That’s always part of the process. You establish relationships with your subjects, and it’s the quality of the relationship that’s going to enable you to get the story you need. It did take us a while to earn their trust. It helped that we were able to show them our past work, especially the series “Carrier,” where we went to Iraq on an aircraft carrier for six months. They could see how we treated the stories. It wasn’t some reality show where the situations were manufactured and we were pitting people against each other.

LEO: So, who runs away to join the circus? Who’s attracted to this life?
JD: There are the real circus people who it’s in their blood and in their families. It’s all they know and all they really want to know. They’re like, “People have asked me if I want a house and a yard, and I’m like, why would I ever do that?” Part of their religion is they get to thrill audiences with their performances a couple times a day. On the other hand, you have people who join because it’s a way to become someone else. That’s a classic American story, like “The Great Gatsby” or something. And, you know, for someone who’s trying to figure out who they are, one of the best ways is to force your own identity is by becoming a member of a tribe.

LEO: Tell me about yourself. I understand you’re from Louisville.
JD: I grew up in Cherokee Gardens and went to Saint X.

LEO: Does Louisville figure in your future plans at all, or are you a New Yorker now?
JD: My dad lives there (Louisville). I love it and come home six, seven times a year. It’s definitely still home. For what I do, New York is the place to be. But, what I’d really like to do, as a follow-up to “Circus,” is a six-hour series on a Kentucky thoroughbred farm. We’ve been putting out some feelers on that, and it would be an opportunity to move home for a while.