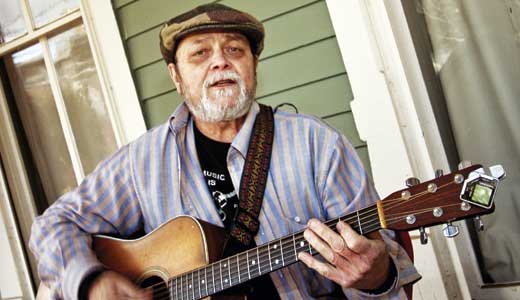 John Gage will know in May whether he needs a heart transplant.photo: ron jasin

Growing up in Lawton, Okla., John Gage’s introduction to the world of sound came when his father, Ray, an illiterate cement mason, unwound from a day’s work by blowing harmonica. Dad only performed for 15 to 20 minutes before turning on his weekly ritual — Friday night boxing matches. But to his son, Ray’s hobby was the point of no return.

Gage didn’t keep his love of music to himself. For the last 30 years, the rootsy singer-songwriter based his musical ship in Louisville and around Kentucky — between his own recording projects, like 2008’s Just Between You And Me, his job as a music teacher at Adath Jeshurun and Jewish Community Center, and the most visible contribution he makes to Louisville music — hosting the “Kentucky Homefront” radio show. Recently, he has counseled troubled teens at Our Lady of Peace through the use of blues music and lyrics. Gage never seemed to downshift.

Now he has to. Over the Fourth of July weekend in 1995, Gage suffered a heart attack while walking in the woods near his farm in Metcalfe County. “I wasn’t under any stress,” says the singer, a diabetic with chronic obstructive pulmonary disease. “But since I already had heart disease, I knew that was a possibility.” Gage was taken to a hospital 20 miles away in Glasgow, where he was so agitated that doctors had to give him a shot to knock him out. In 2000, he underwent septuple bypass that resulted in seven grafts. “I’d never even heard of that many before.”

Gage’s heart tissue has been irreparably damaged, and he’s been traveling to the renowned Cleveland Clinic once a month for the last six months. In May, doctors will determine whether he needs to be put on the list for a heart transplant, or undergo another procedure that installs a device that helps pump blood through his left ventricle. “It’s what they gave Dick Cheney,” he says.

Both surgeries could cost $250,000. Gage has health insurance but cannot afford his portion, which could run upward of $10,000.

On Sunday, friends and fellow musicians are coming to River Bend Winery with open wallets. Headlining the night is New Country Folk, whom Gage formed with Bill Clark and Roger Culter. The trio toured around Illinois, Indiana, Tennessee and Michigan from 1976 to the early 1980s, and recorded one album, Down To Earth. John McCormick, Turley Richards, Mickey Clark & Blue Norther, Relic, Storefront Congregation, TKO and Will Owen Gage (his son) also perform.