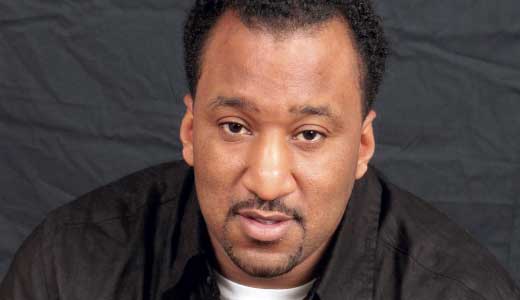 The Improv will host a special event Sunday night when local comedy giant Eric Kimbrough takes the stage as emcee for the second of his “Eric Kimbrough Comedy Extravaganza” shows, which will feature some of his favorite comedians from all over the country. The Alabama native came to Louisville almost 20 years ago for college and to spend time with family — and he hasn’t left. His high-energy brand of semi-improvisational crowd work makes him one of the most original comics in town.

LEO: So what made you start doing comedy?
Eric Kimbrough: It was 2001 — right after 9/11, and I had a joke about not flying in planes that I thought would be funny, so I came out and tried it. The joke was OK, but I got a little laugh … that’s all I needed.

LEO: Were you nervous?
EK: Shit yeah, I was nervous. I came to the club probably three months before I went up and watched, just to see if I could do it. I would come, sit in the corner by myself, drink Cokes and eat the free popcorn.

LEO: What is your approach to comedy? I describe you as an “urban Don Rickles.”
EK: (laughs) Everybody says that. I don’t even look at myself as a comic … I’m an entertainer. What the audience wants, I wanna give ’em. Most of the time, they wanna be entertained, and they don’t wanna have to think too hard. Some guys come up and tell very intelligent jokes, and you’re like, “Oh, that joke was amazing, it was well written, it was so smart” … not me. Because I say what people think, I say what people wanna say. When I started, I didn’t wanna be like Don Rickles — I just wanted to be memorable. I wanted people to be like, “You remember that Eric Kimbrough? I almost peed on myself.”

LEO: How much of what you do is improv as opposed to written?
EK: It depends on what night you catch me, but mostly I’m free fallin’.

LEO: Tell me more about the “Eric Kimbrough’s Comedy Extravaganza.”
EK: The first show was great, but this one’s going to be even better. It’s my birthday weekend, and we’re just gonna have fun. It’s just comics that I like. They aren’t famous, people don’t know ’em — but they’re just as funny, they’re just as good, they’ve worked just hard as the famous guys. I mean, we’ve all worked with the famous people, and they’re funny, but they’re more famous than funny.

LEO: What was the genesis of the show?
EK: I got banned from comedy clubs. And I was working as a comic — but not as much as I wanted to because there was always a stipulation with me, like: “Aw, you cuss too much,” or “You’re too wild on stage,” or “Such and such doesn’t wanna go behind you.” So what better thing to do than put on my own show? Sometimes when people don’t give it to you, you gotta take it yourself. You gotta make it happen.