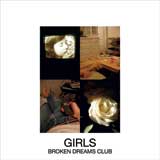 When the dully named Girls released the dully titled Album in 2009, the band incited a tidal wave of blog-driven praise. The waters are a lot calmer on their new EP, Broken Dreams Club. Central to the story has been enigmatic frontman Christopher Owens, whose biography includes a religious cult, desperate poverty, loss and excessive drug use. The first album’s candor, sunny disposition and unabashed ’60s pop parroting made it an indie hit, but the outlook is a lot bleaker on the follow-up. The songs are no less direct, though. On the title track, Owens sings, I just want to get high, but everyone keeps bringing me down. The mini-album is colored almost completely by that sentiment, and even though it’s only six songs long, by the end it feels like a real drag.