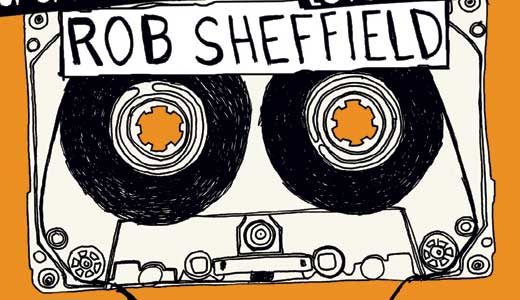 If you’ve read Rob Sheffield’s first memoir “Love is a Mix Tape,” then his latest offering, “Talking to Girls about Duran Duran,” will initially offer lots of existential quandaries for the reader to wrestle with.

Long gone is the hopeful melancholy that flowed through “Mix Tape,” a memoir that documented his first star-crossed marriage to Renee Crist (who died tragically of a pulmonary embolism at age 31). In “Duran Duran,” we are reading a post-modern/post-millennium/post-Renee memoir and, in a lot of ways, a post-Rob Rob. The awkward, love-struck young man from “Mix Tape” is not here; left is the awkward, love-fascinated boy as told through the filter of a humbled middle-aged man.

Sheffield doesn’t seem like the forlorn romantic he was in “Mix Tape,” but this material isn’t as heavy from the outset, so there’s no beautiful sadness weighing down these memories. He remains an engaging, passionate writer who sucks you in with every quirky observation and obtuse pop-culture reference — from “Heathers” to “Purple Rain.”

Each chapter is titled after a different song and artist from his New Wave youth, like Hall & Oates’ “Maneater” or The Smiths’ “Ask” or Madonna’s “Crazy For You.” And each of these songs has, somewhere in the back of his mind, melded itself to a specific memory or point in time. Sheffield’s thought process is far from linear. Figuring out how he brings his disconnected thought process to bind the stories of his life with the songs that define them (or is it the stories that define the songs?) becomes part of the joy in this book.

Prime example: In the chapter about “More Than This” by Roxy Music — the actual song isn’t even brought up until the last four pages. The first six are dedicated to the wisdom spewed in Kenny Rogers songs, leaving you to find the through-line from where you are (Kenny Rogers), and where you know you’re going to end up (Roxy Music). And between these two points, Sheffield weaves in the story he wants you to read.

In “Mix Tape,” he told the tragic story of he and his wife, and in doing so, told the tragic story of the ’90s, an uncertain time that seemed pretty certain and was played out to a soundtrack of feedback and fuzz. “Duran Duran” is a series of disconnected stories that combine to tell the story of the ’80s, a decade of excess that seemed like a decade of depression, bad clothes, bad music, bad hair and bad presidents, all of which felt like part of the norm. There seemed to be a comfort in all of the badness of the era — a security blanket of badness that was unceremoniously ripped from our hands with the inauguration of Bill Clinton and Kurt Cobain as the following decade’s pacesetters.

The smeared, Technicolored tapestry of the ’80s offers the perfect backdrop for Sheffield to mull over his relationship with his sisters, his childhood friends or the guy on the Amtrak train. In a weird, cyclical, chicken-or-egg sort of way, this leaves neither Sheffield nor his adventures to drive this book; rather, the decade itself emerges as the protagonist of this story.

Perhaps the ’80s are the star-crossed lover he’s pining for this time around … that 10-year block of time that dripped of cultural and socio-political innocence is his new Renee. Although it’s hard to tell through the changing lens of so many selves we’ve seen of Sheffield, here he seems fully content sucking his proverbial thumb, basking in the safest unsafe decade our country’s ever known — and talking to girls about Duran Duran.