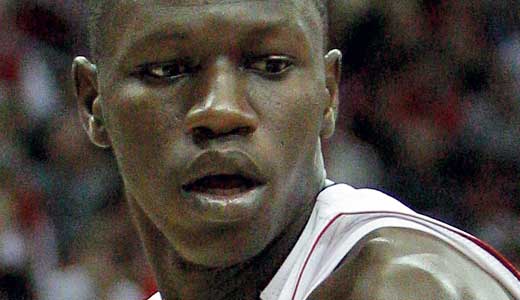 Cards fans are glad Gorgui Dieng is here. How he contributes is another story.

What a difference a Dieng makes.

Gorgui Dieng is a 6-foot-10 freshman center from Senegal who, one fine day a couple weeks ago, was suddenly declared academically eligible to play basketball for the University of Louisville.

Dieng reportedly scored high on college entrance examinations, speaks several languages and is the kind of student from overseas every college would love to enroll. He was originally ruled ineligible for a scholarship and not permitted to play right away, because he had not earned the required core credit courses at a prep school in West Virginia.

The NCAA’s decision seemed unfair and disappointingly familiar to many Louisville fans. A few seasons ago, a similar ruling kept Muhammed Lesage from playing. Lesage, a 6-foot-11 center from Nigeria, lost his appeal to the NCAA, then lost a legal challenge to that ruling in the Kentucky Supreme Court, which carried a majority of judges who graduated from the University of Kentucky. But that’s another story. Nonetheless, Lesage graduated from U of L and went on to attend University of Pennsylvania’s Wharton School of Business.

Given that history, many were shocked when the bad, old NCAA reversed its original ruling and granted Dieng’s appeal. The news took about 1.7 seconds to reach the e-mail inbox of nearly every Louisville fan, and by that afternoon, Dieng was reporting for practice in his red-and-black uniform. A few days later, he celebrated in Louisville’s exhibition game by hitting his first shot, a three-pointer.

What does this mean for the Cardinals?

Dieng is tall and athletic. He’s also inexperienced and won’t be a starter for Louisville this season, let alone a savior.

But Dieng’s presence could jumpstart a team that has lost its top three scorers from last season and fails to bring high-profile recruits, many of whom backed out of early commitments to sign with other schools.

Dieng is tall on a team that’s small. He’s agile, quick and enthusiastic, and seems likely to stick around rather than jump to the pros after a season or two. He might be the right piece of the puzzle around the rim and off the bench for a team without vaunted stars and an identity.

“I don’t think this team is going to win on its parts,” says coach Rick Pitino, who begins his 10th season at Louisville and 25th overall. “I’ve had teams that win as a whole, and it’s much better, more pleasing to the eye. Last year, I thought we had parts, but they didn’t interact together to be a real basketball team. I think this team interacts very well together. Their attitude is great. Their threshold for work is great. Their desire to pass the ball is terrific.”

Passing will be paramount.

“I love passing,” Pitino says. “Whether it’s on the low post, whether it’s up the court, on the fast break, off a steal. Some fans get excited about the dunk. Some love the three-point shot. I get most excited about a great pass — and this style is all about passing the ball.”

Pitino promises a fast-paced attack similar to the high-scoring Loyola Marymount teams of two decades ago, or Virginia Military Institute more recently. Probably not as dizzying as Division III Grinnell College, of Iowa, which isn’t happy until it scores 120 points.

Sophomore gun Mike Marra says Louisville will try to get the ball past mid-court in less than three seconds.

“It’s living a dream. I’ll get more shots,” Marra says, with a laugh. “But not just more shots, more open shots. Good shots. We’re going to try to take the first open shot we get. The thing with this style — there’s not really a set play, we’re just playing basketball, looking for the good shots the defense gives you.”

“It’s going to be a different kind of defense, really fast up the line. Our whole mentality is make a steal, block a shot, so even on defense we’re trying to get
on offense.”

Pitino is also a realist: He knows his talent pool is shallow.

“We have 10 players now we can rely on. But I don’t think we have any who have separated themselves from the pack except maybe (senior guard) Preston Knowles, because he’s been through the wars and understands the toughness of it.”

In his first two seasons, Knowles sprang off the bench as a defensive whirlwind and instant scorer. Last season, Knowles got more playing time, and this year the coach expects him to mature into a sterling senior star. “The other players listen to Preston absolutely,” Pitino says. “They follow him in whatever he does.”

Also stepping in as a starter is sophomore guard Peyton Siva, who brims with confidence. He’s fast with the ball, and fans like him to let’r rip. Chris Smith, a transfer from Manhattan College, is also quick to the basket and can score when he gets there. Both need a better outside shot. Kentucky Mr. Basketball Elisha Justice and New Yorker Russ Smith round out the stable of guards.

That’s probably Louisville’s most glaring weakness. In a league always stacked with bruising big men, the Cardinals have few who top the tape.

Center Terrence Jennings spent the past two seasons backing up star center Samardo Samuels, who left early for the pros. Jennings isn’t as interested in scoring as Samuels, but he’s built like a steel spike and is swift enough to be a factor at both ends of the court in a fast-paced game. Pitino, always the motivator, says Jennings has the body the pros want. “Now he has to decide if he’s going to play someday in the NBA, or in Yugoslavia.”

Another tall player who may be helped by a faster-paced style is slim 6-8 forward Rakeem Buckles, whose best games came at the end of his freshman season. Buckles is not a shooter, nor a pattern player. He’s a loose horse, getting up and down the court, finding the ball and sticking it in. Good rebounder, too. Jared Swopshire, a starter last season, is out indefinitely with a groin injury.

The other forward may be 6-4 Kyle Kuric, who turned in 22 second-half points in Louisville’s upset of Syracuse in the final game at Freedom Hall. Stephan Van Treese has a plan when he enters the game as a substitute. George Goode rebounds well and has developed a mid-range jumper.