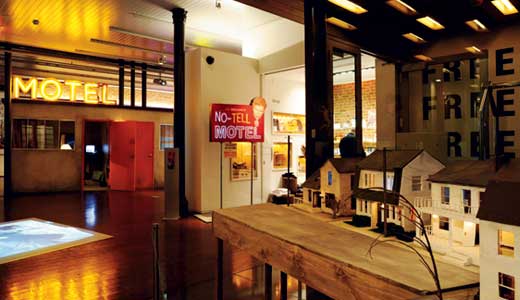 WHO IS VERONICA HAYDEN, AND WHY IS SHE ON THE RUN? WHY DID HER CREEP-TASTIC HUSBAND, VICTOR, SUDDENLY GO MISSING, SHORTLY BEFORE VERONICA VANISHED? WHAT’S UP WITH ALL OF THE EXTRA WALLS IN THE LOBBY AT 21C? AND, UM, WHY THE ALL CAPS?

You never know what you’re going to find these days when you stroll past the red penguins and step into the doors of the Main Street museum/hotel. What has recently been erected in the Street Level Gallery is a structure of similar category, but quite different from the elegant, modern exterior of the 21c building — and a lot smaller. Tracey Snelling’s “Woman on the Run” installation brings comic book action to life with a pinch of film noir, using video, sculpture, photography and live-scale, three-dimensional models.

The story, based on a comic book Snelling developed, centers on Veronica Hayden, a character wanted for questioning after her husband disappears, who goes on the run for reasons that are unclear. The exhibit takes the viewer through her journey in and out of motels and bars, while dodging police and detectives. There are live-scale models of the places she goes, so viewers can actually become part of the story and experience the sights and sounds of it. It’s then up to the viewer to figure out the answer to the mystery of Veronica Hayden — what kind of woman is she, really? And what kinds of stereotypes do we, as viewers, instantly call upon?

“When I came up with this installation, I was thinking about women’s roles in general, in society, but also in films in the 1950s and ’60s, and film noir,” Snelling explains. “There’s always these fated characters — there’s the nice girl; the femme fatale’s always the one that’s more appealing, but she has some flaws. I just want to look at it and question it. What’s a woman’s role today? Is it good to be the independent, kind of not a perfect nice girl? Or is that still fated?”

Snelling premiered “Woman on the Run” at Selfridges Department Store in London in 2008, and she is touring it around the United States. The San Francisco Bay Area-based artist started out as a photographer, and also worked with collage, using a lot of black-and-white images from 1940s Life magazines. It was when she collaged an image of a brownstone building, with the front wall missing so all of the rooms could be seen, that she got the idea to build 3-D structures. This interest in sculpture, combined with her attraction to places that are older, run-down, lived-in and seedier, yielded to her recent projects like “Woman on the Run,” which illustrates the grittier outskirts of cities and explores the idea of sense of place. She began this type of work during her residency in Beijing.

“A lot of my work is about the place, and not only the place, but the people that live in the place,” she says. “It’s more about the idea of what’s at the edge of town and who stays there, who ends up there, what happens in that place. It sets a place for the story to happen. It’s more interesting to me — older buildings than newer buildings. Newer buildings, there’s not a lot of history, nothing’s really happened yet. It’s not dirty. Somewhere along the line, I became more attracted to the old, run-down thing, and it becomes actually beautiful to me.”

In experiencing Snelling’s exhibit, you step into a different world — one that lacks the masks of glamour and romanticism. It is a fictional story, a comic book come to life, but it represents a realm in which many people live, whom we don’t often see or think about. But it is also a fun mystery that the viewers get to participate in and solve for themselves.

“I think it’s great to have the viewer become part of the story,” Snelling says. “You can go in the motel and pick up the phone and hear a conversation going on, and you can, for a moment, become the character and escape, or even if it’s not escaping from your own life, you can just try on someone else’s life for a moment in the day where you have to go back to the office and do your daily stuff.”