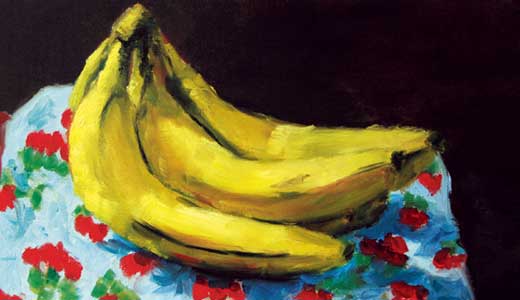 One of the rooms at the Tim Faulkner Gallery is looking especially yellow these days — and kinda fruity. Bananas. Lots of bananas. What’s this guy’s deal? Why so many images of this golden potassium-packed phallic fruit?

There are 52 of Ryan Burns’ banana paintings to be exact, one for each week of the year. The University of Louisville alum and current MFA candidate at Northern Illinois University knows all too well the common artist’s predicament of juggling a full-time job with art. Last year he discovered a way to resolve that dilemma — by setting aside one day per week to paint, and completing an entire painting in one sitting.

“I chose the bananas because they were a similar shape to the beaks of the birds in my paintings,” Burns says, referring to a series of bird paintings that were shown at Galerie Hertz earlier this year. “Using bananas also alludes to the long history of fruit still-life paintings.”

He was inspired by the book “The Art Spirit” by Robert Henri, an early 20th century painter. It was this book that drove him to paint the first banana portrait, and it was Ben Snakepit’s three-panel comics, which acted as a journal about his daily life, that motivated him to continue them each week. Having completed his undergraduate work, Burns no longer had the added pressure of a thesis, so the project just seemed like the practical thing to do, though the process was bumpy at times. He wasn’t used to cranking out paintings so quickly — previously, his works would take him two or three months to complete.

“The first banana painting turned out really well, but it was beginner’s luck, because the next 20 looked like shit,” Burns explains. “This was the process. There were good paintings, and there were bad paintings. The first two-thirds of the banana series were a chore, because I was learning how to do basic things like mixing accurate colors, drawing accurately with paint and putting wet paint next to wet paint without making a mess.”

He eventually got the hang of it, and the project began to take on a life of its own, becoming more reflective of Burns’ current state of mind. He eventually ditched the neutral backgrounds for still-life paintings and replaced the scenes with things like Old Milwaukee Light cans, a circular saw or a bathtub. He would, of course, paint from live models, meaning he had to pick up a fresh batch of bananas every week. Thus, he and his roommates ate a lot of bananas that year, but he admits he hasn’t really bought any since. So no, he doesn’t have a banana fetish, and he does see the humor and peculiarity in his subject matter.

“There’s a sense of humor in this, like, why am I doing bananas over and over again?” Burns says. “It’s funny to paint something that’s not very important. Bananas just look funny. Everybody made fun of me, like, ‘Why are you painting a bunch of dicks, Burns?’”

Even though the content of the paintings wasn’t exactly profound, Burns says it really helped him grow as an artist, as he was able to pick up some new techniques and be proud of a year’s worth of work that started out as a way to keep a brush in his hand. He admits he’s anxious to see how viewers respond to this project.

“Being in the Tim Faulkner Gallery — a lot of the stuff you see is mixed media, graffiti art. There’re subject matters like horror and pop culture, and I’m doing something really traditional — a great contrast to what happens here.”