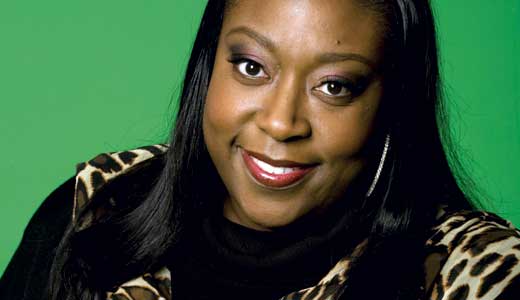 I can hear the bizarre-o version of the Journey classic now: She’s just a city girl, born and raised in south Detroit/She took a midnight train goin’ anywhere. Loni Love has a lot of heart and a lot of fight in her, and those two qualities (not midnight trains) have taken her everywhere. The Detroit native started out as an electrical engineer, doing comedy on the side for extra cash. Then, with two careers, one was blossoming while the other fell stagnant. And when her company had to make cutbacks, Love saved someone else’s job by leaving to pursue stand-up full-time. Now she is on every watch list in the industry, had an hour-long Comedy Central special called “America’s Sister” that aired in May, and is a regular panelist on “Chelsea Lately.” Love will be at The Improv this weekend.

LEO: Have you been through Louisville before?
Loni Love: It’s my first time in Louisville — it’s always interesting when it’s your first time at a place because you get to meet the people.

LEO: Are there going to be any Halloween shenanigans?
LL: I haven’t planned any. But who knows? I have some crazy fans … they may plan some stuff.

LEO: What made you want to be a comic?
LL: I started out as an engineer, and I did comedy in college to kinda supplement my income. My whole life I had planned to be an engineer, but when I got to Los Angeles, I went to The Comedy Store in Hollywood one night and I saw there were a lot of guys in comedy, but there weren’t a lot of women. So I kicked back into it because I felt like there should be more female points of view expressed in the art form.

LEO: You talked about there being a lot of guys in the industry and not many women. How do you feel the experience of a woman in stand-up comedy differs from that of a man’s?
LL: There are certain emotions women have that are different from men. I think for so long we’re used to just seein’ men on the stage, and men bein’ funny; but women are also funny in different areas. And because we’re women, we have different points of view than men and different emotional values than men — and those things need to be addressed, and they haven’t been addressed in a while.

LEO: How does growing up in Detroit inspire your material?
LL: I think growing up in Detroit gives me the attitude I have about life in general. Basically that I’m a fighter. Detroit itself has always gone through ups and downs. Our attitude has always been we’ll work, and get stuff done, and when times are tough, we’ll see through it. Right now America is goin’ through a lot, and my attitude is — bring it on, we can deal with this, and we’ll be OK. Hard times in life aren’t gonna break me, I’m still gonna make it, I’m gonna keep living.

LEO: You say you’re a fighter, but you have such a lovable demeanor.
LL: I have a caring spirit, I don’t wanna be totally mean. Most fighters have heart. That’s why we love Muhammad Ali, we see him as a fighter, but then he’s a jokster. You gotta have some heart if you’re gonna survive.

LEO: I have to ask every one of the “Chelsea Lately” comics I interview: What was it about her show that has made her and everyone around her the hottest comics in the industry?
LL: She encourages comedians to really be themselves. She doesn’t care. And it’s the only place on TV where you can see stand-up comedians every single night of the week. Late-night shows used to do that — now they only put on singers and actors. They stopped putting on comics. I mean, most of those shows put comics on 20, maybe 30, times a year — she’s doing it every night!

LEO: I was surprised to find out that you were 39, you look ravishing … what’s your secret?
LL: I drink a lot of beer. Beer keeps you youthful. It keeps that skin goin’.

LEO: This has been a rough couple of months for comics with the passing of Robert Schimmel and Greg Giraldo.
LL: Both of those guys were great guys. The thing that people have to realize is that as comics, because people are so accustomed to us making them laugh, people forget we have our own problems and our own troubles. Shimmel took his pain, expressed it, and gave it to America. People who have cancer are able to look at him and see he lived through it. It was like a crutch, he used it, and then threw back out. I think sometimes we forget that comics have feelings and have issues, too. But that’s what we do — we take it to the stage. They’ll be missed, they really will. They were great guys. But we have their great routines to remember them by.

LEO: You actually covered President Obama’s inauguration for “D.L. Hughley Breaks the News.” What was that experience like?
LL: I was very honored to be able to do that. When you become a comic, you never think you’ll have the opportunity to be a part of history. And that was a really great time. It was great to be a part of history and be able to do it the way I wanna do it.