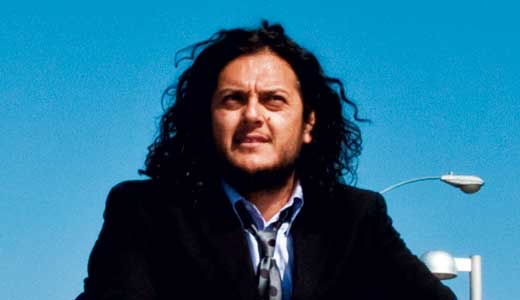 The list of people who can say they’ve appeared on NBC’s “Last Comic Standing” is getting pretty long after eight years on the air — but the list of people who can claim they’ve won “Last Comic Standing” is still small. Felipe Esparza is the newest addition to that esteemed list, having won the most recent season of the hit reality show this year. Born in East L.A., Esparza was raised in a poor household and started doing stand-up at open-mic nights in the mid-’90s at L.A. clubs like The Laugh Factory. After years on the road, and years of being pigeonholed as an “ethnic comic,” he now finds himself a universal draw all over the country, and recently released an album called Rebound Material that is currently in iTunes Top 100 Comedy Albums. Esparza will be doing an exclusive one-night-only appearance at The Improv. For more information on Felipe Esparza, go to www.felipesworld.com.

LEO: How long have you been doing stand-up?
Felipe Esparza: I started doing stand-up at open-mic in ’94. I did that for a couple of years, and in ’96, I got on my first TV show on Showtime with Paul Rodriguez. I think Greg Giraldo was on that show, too.

LEO: Well, it’s hard for me not to ask this right now, but do you have any thoughts, or anything you’d like to say about the late Greg Giraldo — who was one of the judges for your season of “Last Comic Standing”?
FE: I’m so sad that he passed away, and also happy that he left an impact on my life. When I auditioned for the show, he was the first guy to like me … and he liked me through the show. He kept me going.

LEO: That certainly was a tragedy … he was one of my favorite comics.
FE: Yeah, he was a very funny guy. He always had a great joke for any situation. I worked with him before he ever knew who I was. I opened for him in ’95 actually.

LEO: Growing up in east L.A. — did you always want to do stand-up?
FE: Growing up in east L.A., no one aspires to do anything on television. I grew up in the housing projects. We couldn’t get too many good channels on TV because we had antennae problems — so CBS and NBC were shows we never watched, because the reception was always bad. So we watched ABC. My first taste of comedy was Bill Cosby — my friend Jackie Escalero, he busted out a Fisher Price record player … you know, the one that folds out like a suitcase? He played the (To Russell, My Brother Whom I Slept With) album. That was the funniest bit I had ever heard.

LEO: Gabriel Iglesias talks about you a lot — is that relationship more social or creative?
FE: More social. We hung out before he started doing jokes about me.

LEO: Have you ever written anything that was so far out there, so raw, that even you wouldn’t say it on stage?
FE: Yeah … a lot of stuff. There’s a lot of stuff I won’t say about domestic violence, but I do have one joke I pull out sometimes that always shocks the audience.

LEO: What’s the craziest thing to have happened to you on the road?
FE: There was a time that Gabriel checked into my room before me, and he used the restroom — No. 2 — didn’t’ flush it, and left the heater on.

LEO: Tell me about the hair … ladies must dig it …
FE: Oh ya’ know, the ladies love the hair … they always wanna touch it. They wanna know what shampoo I use.

LEO: What was the “Last Comic Standing” experience like for you?
FE: I think if I’d not won, it would’ve been bad. But I won so I have to say it was good, all good.