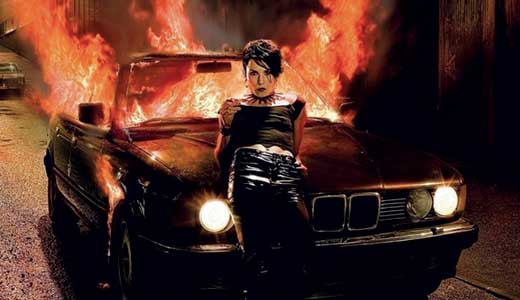 The Girl Who Played With Fire

THE GIRL WHO PLAYED WITH FIRE

Lisbeth Salander is back! Noomi Rapace once again stars as the oddly sexy — if tiny — super-Goth-chick you simply don’t screw around with. The welcome sequel to Stieg Larsson’s “The Girl with the Dragon Tattoo,” this one seems a bit rushed (even at 2+ hours) compared to “Tattoo,” but it’s still gangs of sex-crazed, violent fun as Lis and Mikael Blomkvist (spoiler alert!) expose a sex-slavery ring while avoiding the police, who suspect her of murder. Once again in Swedish/Italian/French with subtitles, but well worth the read. Recommended.

Local babe Jennifer Lawrence keeps making us proud, this time in another dark tale of family. She’s part of the Dolly clan, struggling to get by in the Ozarks of southern Missouri. Her job is to take care of her mentally ill mother and younger sibs while Daddy cooks meth and runs from the law. But she simply runs out of cards to play when Dad hocks the farm to do a drug deal, and none of her neighbors or relatives will break their silence to help her.

The Buddhist caves of Ajanta, in the state of Maharashtra, India, were carved by hand, beginning around 200 B.C., just 300 years after the death of the Buddha, and were continually expanded and refined for more than 850 years. Then they were abandoned and forgotten — except as myth — for nearly 1,200 years before being rediscovered. Now you can see these miraculous underground cathedrals and hear the legends associated with them, thanks to this excellent doc.

From our buds at Troma, this unusual doc about Bob Berdella, a Kansas City serial killer, exposed in 1988 after one of his would-be victims was found bloody and dazed, limping down a busy street wearing only a dog collar. Narrated by crime author James Ellroy and featuring some over-the-top re-enactments, this is not for the squeamish.

Written and directed by Ivan Reitman, too few people have ever seen this terrible horro-comedy/cult gem, starring Eugene Levy and Andrea Martin. They must survive the night in a restaurant haunted by a trio of man-eating ghosts. The studio thought the results were so unwatchable that they added a “horror bell” (sounds like a doorbell) to warn/wake up viewers when the blood was about to flow. We don’t care. We thought it was genius … but we’re kinda warped.

LEGEND OF THE BLACK SCORPION (aka THE BANQUET)

This excellent tale of oriental empires and unrequited love is based on Shakespeare’s “Hamlet.” With his dynasty in disarray, a young price (Daniel Wu) cannot prevent his emperor father from taking his would-be girlfriend as his empress. But when the emperor is murdered by his brother, who claims the girl for his own, the prince is exiled. He returns for justice and a royal banquet. Sumptuous.

PSYCHOMANIA (aka THE DEATH WHEELERS)

Considered to be the cream of the British zombie-biker-movie crop, this ’70s exploiter featured a great cast (Nicky “Witchfinder General” Henson, George “Village of the Damned” Sanders) and a killer premise: young Satan worshipers make a deal with the devil in exchange for eternal life. Problem is, they didn’t read the fine print! The vid has long been out of print, but has now been fully remastered from an uncut 35mm copy, and includes all new bonus goodies. Wonderfully bad.

SEX AND THE CITY 2

Even die-hard fans of SATC will admit that this movie was a complete and total misfire. The four aging, fashion-obsessed friends go to Abu Dhabi and make fun of all the women wearing burqas. Completely tasteless and just plain awful, its only redeeming moments are provided by braless and beautiful Alice Eve as the babysitter.

WAR OF THE WORLDS: THE COMPLETE SERIES

We were big fans of this cheapo TV series from the late ’80s that dared to pick up the plot from the classic 1953 movie and run with it. In the first season, the Martians, who have survived on Earth in government labs, escape to begin their colonization again — this time from INSIDE the human body! Jared Martin leads a band of gun-toting scientists out to round them back up. Season 2 got even weirder, when the Martians themselves get sacked and replaced by the Morthren, a new breed from back in the Red Motherland. Lots of TV sci-fi fun.

WHO IS HARRY NILSSON (AND WHY IS EVERYBODY TALKIN’ ABOUT HIM)?

Long overdue documentary on one of the world’s greatest — and most eccentric and elusive — musicians. From “(Can’t Live If Living Is) Without You” to “Jump into the Fire” to that damn “Coconut” song, Nilsson raised the bar on pop music with a vocal range that seemed limitless. His close friends included both John Lennon and Ringo Starr (he starred in Starr’s unbelievably bad “Son of Dracula” movie), as well as the Monty Python crew, the Monkees, Randy Newman and The Beach Boys — all of whom contributed private material to this simply excellent doc. Contains no fewer than 50 performances. A must own.

WWW: WHAT A WONDERFUL WORLD

A movie that defies categorization. In modern-day Casablanca, a hit man falls in love with a traffic cop’s voice. The cop also moonlights as a prostitute, which leads us into a series of small, intertwined stories that — somehow — take us back where we started. The ending is amazing. In subtitled French and Arabic.