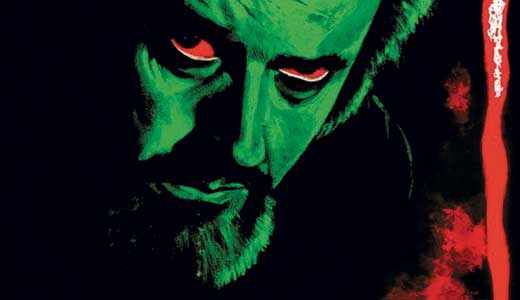 A classic, once-lost horror film with a truly scary back story. Mike Raven, a successful pirate DJ and celebrated occultist in England, stars as the insane sculptor who combines murder, dismemberment, sorcery and sex in his masterpieces. He became something of an overnight horro-sensation. Then, after just three more movies, Mike gave up showbiz to become … a sculptor! This uncut HD restoration comes from the only complete film version on the planet … on loan from an English coven.

One seriously disturbed movie about seriously disturbed movies. A cult filmmaker begins to suspect that one of his rivals is guilty of making snuff films. The rival, Erik Marcisak, expounds so poetically on the voyeurism inherent in horror movies that it actually draws you into the film, breaking the fourth wall. Quite frightening; worth checking out.

A dramatization of one of the most appalling events in history: The true tale of Hypatia, librarian of Alexandria, keeper of all the world’s accumulated wisdom at a time when women were considered property, who was murdered by the followers of Cyril — whom the Christians later made a saint — before burning the library to the ground. Stars Rachel Weisz as Hypatia, with Max Minghella and Oscar Isaac as her suitors. Made in Spain by Alejandro Amenábar.

Ten of Fred Astaire and Ginger Rogers’ greatest films, plus the documentary “Partners in Rhythm” and a replica press book from back in the day. Includes “Flying Down to Rio,” the first film in which they danced together — and stole the show, even though they were fourth and fifth billed. All 10 are filled with lavish sets, classic screen talent and great music, much of it provided by Irving Berlin and George and Ira Gershwin.

A wonderfully warped comic take on the zombie movie that’ll have all the dudes in the audience grabbing their junk. A bunch of guys, including Danny Dyer and Stephen Graham, head out of town for some guy time, only to discover that their destination has been infected by a virus that turns all the women into man-grinding she-devils out to slice off all their man-parts for dinner. Bloody good fun.

Josh Brolin stars as the wickedly scarred bounty hunter, a favorite cult character from early graphic novels à la “Ghostrider.” Here he’s teamed with John Malkovich and the body of Megan Fox, after which there apparently wasn’t enough money left in the budget for a coherent plot. Everything just seems to amble around aimlessly, except for bad-guy Michael Fassbender, who chews scenery like a rabid beaver. A shallow and uninvolving experience, but visually kinda cool and blessedly short. Worth a watch if you don’t expect too much.

LANGUAGE OF THE ENEMY

Eion Bailey, as an American businessman in Israel for a funeral, becomes trapped across the border with a beautiful Palestinian. A good little thriller with something to say about Arab-Israeli relations and the future of peace on our planet.

A first-rate family offering that takes the Lassie mythology to Ireland. Peter O’Toole, Samantha Morton and Peter Dinklage co-star behind the dog in a Christmas-themed tearjerker.

The Fillmore has hosted some of the greatest acts in rock history, but Los Lonely Boys may be the least well-known. Which is a shame considering that this Texas trio of brothers blends rock, blues, old-boy country and Tejano music like no one on the planet. Best of all, the sound mix on this DVD is amazing! Possibly the best live-concert recording we ever heard. Recommended.

A welcome look at a true enigma, stripped of all its silly 20th-century parapsychological trappings and mystical baggage, revealing that the truth of the megalith is even more amazing than the fantasy. Loved it.

All three “Robocop” movies on Blu-ray. The Paul Verhoeven original is still the best, with Peter Weller as the cop who gets blown apart by Kurtwood Smith, only to be reassembled by Ronny Cox. One of the greatest action films of the ’80s: gory at times, yet surprisingly deep, and a tantalizing look at a soulless future that is quickly becoming America’s present. Recommended.

A too rarely seen martial arts outing starring the amazing Raizô Ichikawa (who appeared in more than 100 such films in Japan, though is not well known in America) and Shintarô Katsu from the “Lone Wolf and Cub” and the Zatiochi films. Aka “Hakuôki.”

An experimental indie flick with only two characters — young lovers who wake up one Sunday morning and decide to stay in bed all day, no matter what. A very likeable, funny and honest film that should be viewed by people in love. May be hard to find but worth the effort.

Warner Bros. dug up every snippet, clip, cutting and cameo of Bugs for this two-disc set. Contains a dozen full-length cartoons, many TV specials, shorts and rare appearances, plus the doc “Bugs Bunny: Ain’t He a Stinker?”