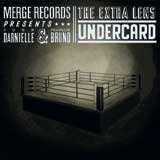 When John Darnielle sings, you listen. Over the course of The Mountain Goats albums, his lyrical wizardry and confrontational delivery shows something attempted by many songwriters but rarely achieved: a gift for merging verbal complexity and feeling. The Extra Lens is his on-again, off-again 20-year collaboration with Franklin Bruno of Nothing Painted Blue, and Undercard is their first album since 2002’s Martial Arts Weekend. Undercard shows Darnielle taking front seat as only his voice can, while Bruno takes a supporting role. In that sense, the album risks blending in with the rest of Mountain Goats’ canon. Considering Darnielle’s precise, high-definition storytelling on “Programmed Cell Death” — Mounds of California avocados, like offerings to an unresponsive God/And the music on the speakers overhead is fainter than the voices of dead — blending in feels right.