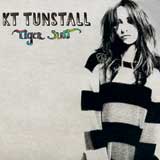 Full of piss and vinegar, that Kate Victoria. She goes off on an environmental tear in “Uummannaq Song,” likely named after the town in Greenland, an island nation scarred by global warming. Later, she borrows a little Neko Case-style gallop in the first half of “Push That Knot Away,” but is at her most radio-friendly on the infectious “Fade Like a Shadow.” During “Lost,” she throws herself upon a nice electro-orchestral backdrop but repeatedly tosses her voice into a borderline-annoying falsetto yelp that, thanks to Coldplay, has become the default gesture for pop singers trying to dramatize their character. “Golden Frames” is awash in blues seduction, but on the whole, is stale in its payoff. “(Still A) Weirdo” is, in truth, quite straightforward. Be less playbook, madam.