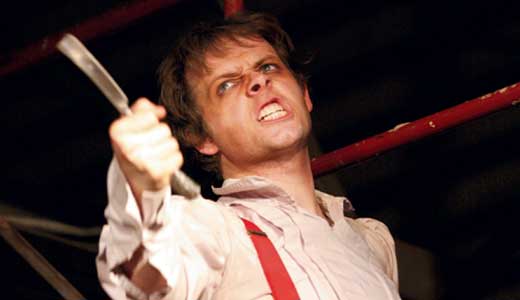 Sweeney Todd: The Demon Barber of Fleet Street
By Renegade Art Productions at The Alley Theater. Directed by Sharon Murray Harrah. Continues through Oct. 31 at The Pointe, 1205 E. Washington St. For tickets or more information, call 713-6178 or visit www.thealleytheater.org.

Walking into the Alley Theater, I was struck by the crudeness of the pre-show set — paint-spattered scaffolding with a few pieces of furniture. A large sheet of muslin hung down on center stage: “London, Fleet St., 1846.” This juxtaposition was extremely striking, and I anticipated a show that would disregard a false façade for the raw emotion and talent underneath. I hoped the production, instead of becoming overwhelmed by what director Sharon Murray Harrah called “a beast of a show,” would embrace this larger-than-life story with creative ingenuity. Instead, the muslin sheet was pulled down to reveal a simple and somewhat uninteresting set (and production).

Renegade Art Productions, in association with The Alley Theater/Art Sanctuary, produced “Sweeney Todd: The Demon Barber of Fleet Street,” with music and lyrics by the great Stephen Sondheim and book by Hugh Wheeler, adapted from an earlier play by Christopher Bond. Set in London in 1846, it’s the story of Sweeney Todd (Herschel H. Zahnd III), a man out for revenge for what he believes is the unfortunate death of his wife and the kidnapping of his daughter. He’s had a bit of a crooked past, and to quell the threat of blackmail and his secrets getting out, he does the only thing he can — he slits the throats of men. Luckily for Sweeney, Mrs. Lovett (Kathryn Furrow-Zacharski) owns the shop below his and has the entrepreneurial idea to cook Todd’s slaughtered victims into meat pies. Business picks up, and, except for nagging notions of revenge lurking in Todd’s mind, their plan works without a hitch until, you know, things go bad.

The story of Sweeney Todd is interesting, and Sondheim’s music and lyrics are inspired, but this production lacks a cohesive vision. The ensemble is vocally strong but inconsistent — some characters are cartoonish and mug for the audience, while others remain stoic in their stilted, stylized movements. Instead of creative “outside the box” set and costume designs, the production appears handicapped by a limited budget. (And almost any theater-going person will tell you that amazing, inspiring work onstage is not reliant on a big budget.) Some of the tableaus Harrah creates are beautiful, and she thankfully uses the full playing area, but then there are moments where it’s difficult to tell whether the blocking is a choice or an oversight.

It’s obvious in both Zahnd and Furrow-Zacharski’s performances that they put everything they have into every moment onstage. And that isn’t an easy thing to do. Furrow-Zacharski, in particular, makes her character an interesting blend of quirky, sociopathic and maternal. But “Sweeney Todd” is a tough show to pull off. Sondheim’s impeccably difficult music requires a constant flip between upper register, lower register and speaking voice. And the long production requires mind-boggling stamina.

I commend any company with such high aspirations, but in the end, it seems they bit off a bit more than they could chew.