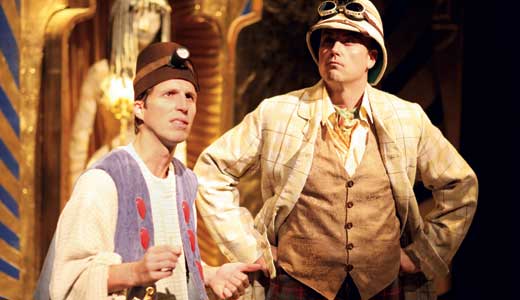 The Mystery of Irma Vep: A Penny Dreadful
By Actors Theatre of Louisville. Directed by Sean Daniels. Continues through Oct. 30 at the Pamela Brown Auditorium, 316 W. Main St. For tickets or more information, call 584-1205 or go to www.actorstheatre.org.

Dark and stormy nights. Wolves howling under the silvery, sinister light of a full moon. A creepy drawing room decorated with a portrait that drips blood. Egyptian tombs inhabited by long-dead dancing princesses. Dialogue that quotes, misquotes and mangles lines from the likes of Shakespeare, Poe and Oscar Wilde, and invokes celluloid memories of brooding — and hysterical — horror films. Such are the makings of Charles Ludlam’s 1984 play, “The Mystery of Irma Vep: A Penny Dreadful,” running this month at Actors Theatre as a droll complement to the company’s perennial October offering, “Dracula.”

Because a play presumably needs a plot, Ludlam has supplied one: Lord Edgar Hillcrest, a widower whose wife, Irma Vep, died under mysterious circumstances, has found himself a second wife: Lady Enid. He’s brought Enid back to live at his estate in Hampstead Heath (once home to Daphne DuMaurier, whose novel “Rebecca,” famously adapted to film by Alfred Hitchcock, inspires the plot). There, Enid finds a pair of loyal retainers (though their loyalties are, to be sure, a bit twisted), and enough ominous specters to populate an entire season of “fright night” Gothic horror movies — and win laughs of recognition from anyone who’s ever shivered at the sight of a mummy, a vampire or a werewolf.

Plot aside — and that’s pretty much where it belongs — “Irma Vep” is more than anything a showcase for virtuoso performers and technicians. Two actors (Larry Bull and Blake DeLong) comprise the entire cast, with silent assistance from a chorus line of young fellows who dance like Egyptians in an outrageously funny tomb sequence. Because the action is fast and the laughs are never allowed to stop, even for a moment, Bull and DeLong find themselves exiting through one door and entering completely transformed, usually within a couple of beats, through another. At one moment, DeLong is a grungy, limping swineherd named Nicodemus; the next, he’s the whirling, breathy lady of the manor. At one moment, Bull is a hulking maid whose coiffure looks like a bedraggled rat (designed by wig designer Heather Fleming); the next he’s the very model of an English gentlemen returning from the hunt (with a stuffed wolf carried on his shoulder).

The physical shape-shifting is impressive, but as directed by Sean Daniels, actors Bull and DeLong slip so adroitly from character to character — altering their voices, their postures, their very rhythms — that at least some in the audience were unaware for a long time that all the parts were being created by only two actors. Suffice to say that the two stars are superbly paired in this production, and though it’s hard to single out specifics for commendation, Bull’s haughty maid, DeLong’s grandiloquent Egyptian guide, and a slow-motion knife fight (brilliantly coached by Drew Facher) left audiences gasping in laughter at a recent performance.