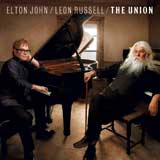 In one corner: a Tulsa heavyweight at 68. The red-dirt, Gandalf-like baron from the Wrecking Crew, edging toward twilight, whose hospital stay couldn’t silence him from turning in one of the better Grammy cameos. In the other corner: a once-fiery Brit phenom who knows too well he might never have built that Honky Château in 1972 had he not heard a Russell bridge. Their ref: T. Bone Burnett, whose production becomes the extra member of any artist he produces, manipulating air, and turning drums into hoofbeat patterns direct from Churchill’s first turn (“Hey Ahab”). Bernie Taupin’s wise lyricism and wise cracks (see “Monkey Suit”) are interwoven with endtime balladry (“There’s No Tomorrow”). Russell and John keep their keyboard work purposeful — it’s not like either has to prove himself — for surefire downhome rumbles. This chateau’s worth staying in.