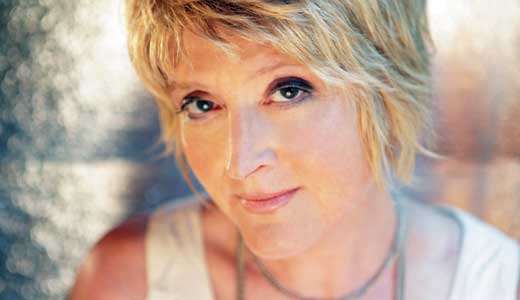 Kim Richey has crisscrossed the globe, but it’s the drive from Nashville to her parents’ house in Dayton that, to paraphrase the title of her new album, wrecks her wheels.

Tim Krekel’s death from cancer last June, at age 58, dug a hole so deep in his former writing partner that every time she passes through Louisville, she can’t escape a feeling of absence. Together they wrote roughly a dozen songs, including “When the Circus Comes to Town,” which appears on Richey’s latest, Wreck Your Wheels.

“We wrote that song a long time ago,” Richey recalls. “We recorded it on my computer when we were sitting out on the porch, a big front deck 30 minutes outside of Nashville. It’s almost like you were in a treehouse. We’d sit there and write. I’d feed him lunch. I figured if he drove that far, then I had to feed him.”

Richey and Krekel wrote for the same music publishing company. “The first time we wrote together, we sat over at his house, but neither of us had any ideas, and he says, ‘Well, do you want to go to a movie instead?’ We took different cars,” she says. “By the time we got there, I had a line for a song, ‘I remove my rearview mirror as a gesture to the past. He had a line, too, and they both went together.” That’s how “Rearview Mirror” was born. The song later appeared on a self-titled album by Nashville singer Andrea Terek.

“I don’t think we ever wrote a bad song together,” Richey says. “He’s just one of the best.”

Celebration will balance loss on Saturday, when Richey joins the surviving members of the Tim Krekel Orchestra at the Vernon Club for a romp Krekel himself would have loved.

This weekend won’t only consist of tributes — Richey has her own set to show off. Wreck Your Wheels, the sixth album from the two-time Grammy nominee, mines different sounds but familiar themes of love, relationships and the occasional late-night walk. Produced by Neilson Hubbard, the record features appearances by Mark Olson, Will Kimbrough and Boo Hewerdine (Eddi Reader, The Bible).

“Each album is a photo album,” she says.