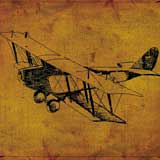 The line “got some good friends that died today” is probably intended to resonate as some Hemingway-styled understatement, but the uninterested way Nick Loss-Eaton delivers it is just that: uninteresting. As the creative force behind Brooklyn neo-Americana act Leland Sundries, Loss-Eaton’s restraint is the group’s defining feature. His baritone sits in the same froggy regions as Lou Reed, Silver Jews’ David Berman or maybe a younger Leonard Cohen, but the idiosyncrasies that made those voices unique are mostly absent (unless repeating a lyric about $2.99 roast beef counts). In the artist bio, Loss-Eaton attributes much of the inspiration behind these songs to a road trip through the deep South. Leland Sundries tries to look at the world through that lens, but the best song on The Apothecary is the one that breaks with that perspective the most: “The Man in the Giant Russian Overcoat.” All of this probably sounds a lot worse on paper. The truth is, The Apothecary is in no way unpleasant, but isn’t anything else either.