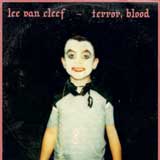 The name of Lee Van Cleef’s new album conjures a darker image than any of the song titles on Terror, Blood. “Pro Xylophone Propaganda” and “I Hereby Announce My Retirement From Music” paint a much goofier picture. The resulting music is, of course, somewhere in between. The songs are aggressive but not necessarily angry, harsh but not grating. The five-piece wield jagged guitars with a post-punk flurry, but can also settle into a riff-heavy groove. Instrumental forays like “Jupago’s Last Stand” put a higher priority on texture than hooks, and even when the band threatens to meander a little too far afield, they reign it back in with a calculated kick in the ass. In short, Lee Van Cleef kill it.