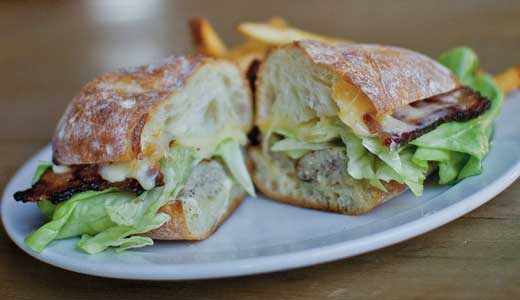 The chattering classes in the urban centers are badmouthing bacon, and I don’t want to hear it.

“We are in the midst of a bacon bubble,” The Wall Street Journal reported earlier this month, and The Atlantic gleefully passed it on. “A growing number of chefs … say it’s about to pop,” snorted Journal reporter Katy McLaughlin. “Bacon had a good run, but now it has gone flabby — used too much and too often, it’s lost its novelty and coated fine dining with a ubiquitous veneer of porky grease.”

Bacon, like pizza and barbecue, is one of nature’s finest foods. It’s been satisfying the masses (well, outside Mesopotamia and the Levant, anyway) since the Bronze Age, and it satisfies me.

Bacon and the other contributions from the noble pig have certainly worked out well for The Blind Pig, the immensely popular Butchertown gastropub that opened only six months ago and that has already drawn attention in The New York Times and on The Food Network, with no need of PR hype or schmoozing. “We just got lucky,” the Pig’s front-of-house guy Jeremy Johnson said. Lucky and good, say I.

Feeling a need for some comforting pig-meat after the LEO Dining Guide’s foray into temporary vegetarianism last week, we’ve dropped in a couple more times to sample two of the Pig’s most bacon-shakin’ treats: The Bacon Butty and The Ivory Bacon, both sumptuous pork-based sandwiches with bacon in a leading role.

Why separate visits? I don’t dare try both of these confections on the same day. Best with some exercise and dieting in between.

Both sandwiches, to be sure, live up to The Blind Pig’s self-declared status as Butchertown’s premier swine dining establishment.

The Bacon Butty ($8.50) is billed as “house-cured bacon on buttered Blue Dog bread,” a description that created a powerful, but inaccurate, image. I was expecting sizzling rashers of bacon cemented in place by thick dollops of fresh creamery butter, dissolving in the meaty heat into a tasty, heart-hazardous mix of bacon fat and melted butter. What I got was a couple of hefty slabs of deliciously house-smoked pork loin on thick, buttered slices of crisply toasted Blue Dog bread. Not that there’s anything wrong with that.

The Ivory Bacon ($9.50) is, remarkably, even more indulgent than the Bacon Butty. This one features rashers of bacon slabs cut from a thick, sweet white boudin sausage (made on the premises), topped with mild domestic Munster cheese, garlicky aioli and leaf lettuce on a sturdy, crusty Blue Dog Pugliese roll. The boudin was tender as pâté, and the bacon was thick as Scrooge’s wallet, and it was … well, let’s just say one sandwich was enough for two. —Robin Garr

Rootie’s Sports Bar on Westport Road doesn’t look like anything special — just another sports bar, with lots of TVs and a few pool tables.

But owner Marty Stein knows a thing or two about the classic Buffalo wing. He and the original Rootie’s location hail from Buffalo. He’s been making Buffalo wings for more than 30 years, having bounced from upstate New York to South Florida and now to Louisville, with stops on “The Today Show” and “Regis and Kathie Lee” along the way. If you haven’t tried Rootie’s wings, you should. They’re known from north to south for a reason.

Along with my friends Fred and Jaclyn, I visited Rootie’s for Monday Night Football recently — Rootie’s is, of course, a Buffalo Bills bar. We had Buffalo wings in our crosshairs. When I arrived, they had already ordered 10 medium wings grilled and 10 of the signature Gourmet Charcoal Grilled Barbecue Wings. (Wings start at $6.99 for 10 and $10.99 for 16; larger orders are also available.)

The first thing one notices about Rootie’s wings is that they are plump, fresh pieces of chicken — not the measly, dried-up things one typically finds at national wing chains. Bite down on one, and you’ll invariably find an appetizing crispness to balance the tender meat inside. There’s nothing worse than a slimy wing, and we didn’t encounter a single one at Rootie’s.

While I normally go for spice, I must admit that those barbecue wings are some of the best I’ve had in Louisville. Grilling them adds a smoky charcoal taste to the thick, faintly spicy sauce, creating a veritable mouthgasm. I wasn’t as crazy about the medium wings, but we later ordered 10 grilled versions of the Drop Dead Suicide wings, and they ran neck and neck with the barbecue version.

One caution, though: The Suicide wings will sneak up on you, heat-wise. Be sure to keep a cup of the restaurant’s signature blue cheese dressing on hand for dipping. Heck, the blue cheese is worth getting in its own right — it’s slightly chunky, boldly flavorful and resembles a cross between traditional blue cheese and peppercorn ranch. Nice.

My buddy Fred also ordered a Smokehouse Burger ($6.99), an ample, juicy, half-pound burger smothered in the outstanding Rootie’s barbecue sauce. This was a solid sandwich, to be sure, and that sauce is just as good off the wing as on, even without the charcoal addition.

Fred, a big-time foodie, raved about the burger. In fact, he actually moaned about it as he chewed, much to our amusement. Jaclyn capped her night with a hot fudge sundae — you gotta like a sports bar that serves ice cream.

The beer list is almost laughably small (Stella Artois is probably the closest thing to a craft beer), but pitchers of Bud and Bud Light are just $6 during games, which ain’t bad if you don’t mind the domestic stuff. Also, it’s a bit far to go if you live in town as I do, but for those wings, Rootie’s is certainly worth a trip. At least you don’t have to drive to Buffalo. —Kevin Gibson