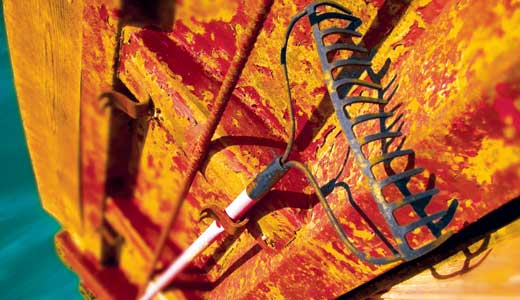 When I heard Pam Grier was stopping through town this week to tout her book “Foxy: My Life in Three Acts,” I scrambled for an interview. Somehow I bypassed her publicist and found myself e-mailing back and forth with the real, live Pam Grier. Although I’m pretty sure she had no idea who she was corresponding with, she kept sending me recent accolades her book was receiving — including making it to No. 20 on The New York Times best-seller list. Unfortunately, she never made time for the interview, and the last e-mail I got said, “I will be in my barn later. Big hugs, PG.” I am content with that and will save my “L Word” fanatic questions for a later time, possibly Thursday when she stops by Borders. Her book is a detailed account of her childhood struggles, her impressive film career and a few kiss-and-tell stories of her time spent with Kareem Abdul-Jabbar, Freddie Prinze Sr. and Richard Pryor. —Sara Havens

When the smoke clears — which it won’t — Cordozar Calvin Broadus can stand tall on a brick shithouse of accolades. His bona fides in gangsta rap were etched into lore early thanks to Dr. Dre’s unbreakable 1992 classic, The Chronic. The big question was whether The Doggfather from Long Beach could ever measure up. True, the quality of his solo efforts has varied over the years, but who doesn’t want a little “Gin & Juice” from time to time? See also his beating a murder rap, forays into reality television and false starts in cinema (like that “Starsky & Hutch” remake) and the occasional late one (known to delay his onstage appearance by a couple of hours). Yet when you see him, you smile, and you’re ready to bounce to this. —Mat Herron

Theme: nasty buzz saw guitars and singing born from alcohol-hardened lungs. The East Vancouver, B.C., duo, consisting of guitarist Brian King and drummer David Prowse, are smart enough to realize that racket does not equal talent, and with a substantial number of acts opting into drum-and-guitar attack mode, they do more than make up for a lack of bassist. Headlining is The Walkmen, whose new set, Lisbon, provided an odd launch for the band into the wide world of sports talk shows via ESPN. It’s nearing the end of their American leg before jumping over to Europe to open for The Black Keys. Brooklyn shoegazers Arms open. —Mat Herron

The alumni association of Providence High School in Clarksville, Ind., have teamed up with directors John Hetzel and Tim Brown, both of whom are Providence alums, for a theatrical retelling of Mary Shelley’s “Frankenstein.” This staged version isn’t, however, a straight adaptation of the book, nor is it a staging of the Boris Karloff version, although it does show influences from both. This original adaptation is a retelling of Shelley’s story, and preserves many of its overlooked aspects, combining those with important modern scientific and philosophical themes. In this version, the main character becomes obsessed with the secrets behind life and death, culminating in his gruesome creation. The play will be staged the next two weekends, with evening and matinée performances. —Kevin Gibson

“Director’s Choice” features four short ballets selected by Bruce Simpson (the director in the title): “The Seasons,” “März,” “Mopey” and “Grande Pas Classique.” But it’s “Mopey” that may get the most attention. James Moore, from the Pacific Northwest Ballet, is the male solo in “Mopey.” “This is a really unusual combination of classical music/punk rock into a highly physical and psychological piece of work,” says Leslie A. Wilson, Louisville Ballet’s director of marketing.

The rest of the ballets are more traditional. “März” is about “a casual meeting of two people, fascinated with each other, enjoying the time together,” explains Jörg Mannes, ballet director of the State Theatre in Hanover. “The Seasons” and “Grande Pas Classique” are two 19th-century ballets set to the music of Glazunov. —Jo Anne Triplett

“If God is everywhere, then it ought to be easy enough to take his or her picture. I’m surprised the opportunity has been so often overlooked.” This is how John Fitzgerald of PYRO Gallery explains the inspiration for his latest project, which examines the sacred presence of everyday life and how it can be captured in art. Featuring wood carvings from Bellarmine professor and renowned sculptor Bob Lockhart; limestone carvings by Al Nelson (who made the Dragon Boat in Cherokee Park); paintings and charcoal interpretations of Fitzgerald’s Haiti photos, created by Elise Fazio; and a series of portraits by Fitzgerald, the exhibit challenges viewers to reflect on how people and places in everyday life can have sacred significance. (What if God was one of us …) —Jane Mattingly

Blues has lots of structure — and that’s got to be particularly true when it’s blues on the piano, right? Because you got the wrong instrument for bending strings. And how are you going to build up the ominous momentum of that levee coming down if you don’t keep a tight grip on the keys? Well, as sure as the world changes in the wake of the flood, the blues can’t help but find ways to be reborn. Our favorite music-meets-art collective Tin Can Buddha understands that and applies it to music of the deepest American roots. On Saturday night, Bomhard Theater at the Kentucky Center is the site for “Eighty-Eight Shades of Blue: A Blues Piano Summit.” Featured on the piano will be Harry Pickens, Buddha mainstay Lee Carroll, Joe Turley and Caroline Dahl. The evening also serves as a release party for Tin Can Buddha’s new disc, Wake Up. —T.E. Lyons

Art therapy means exactly what it says: personal insight gleaned by way of the creative process. Couple it with the natural artistry of children and you get art that’s as revealing as it is moving. The Kentucky Museum of Art is showcasing “Healing Creatively: A Collection of Art Therapy Experiences From Kosair Children’s Hospital.” The exhibition features 75 works by patients and their families.

“Our hope is to not only increase awareness in our community about (Kosair) and the impact of art therapy in a pediatric medical setting,” says art therapist Emily Johnson, “but to also empower our patients and families through the sharing of their artistic expressions publicly.”

The reception is on Friday, Oct. 22, from 5-8 p.m. with many of the artists in attendance. It’s free and open to the public. —Jo Anne Triplett

When David Sedaris takes the stage, you certainly can’t call the event “A reading and signing.” The much-published satirist and humorist isn’t giving a stand-up comedy concert — yet he’s got multiple Grammy nominations to show that he knows how to engage listeners as well as book-buyers. In some ways, Sedaris’ appearance at Whitney Hall might be like those “lectures” that great writers of generations past scoffed at (often acquiescing because they made a reliable living wage). Nowadays, though, lectures are categorically considered a must to avoid, so instead we’ll have Sedaris reading from his work — likely to include excerpts from his new “Squirrel Seeks Chipmunk: A Modest Bestiary” — then sliding into some storytelling that’s as sharp in presentation as in wit. Never doubt that you’re in the best of hands: Sedaris is as observant as he is prolific. He knows his audience and knows how to entertain them — though he’s counting on you to mature faster than he ever will. —T.E. Lyons

Anybody who’s ever been too drunk to successfully string together a coherent sentence, or fumble the pronunciation of a common word, should appreciate the Herculean feats of intellectual strength exhibited at Nachbar’s “Spleling Be.” The fifth of its kind, the bee affords alcoholic etymologists the chance to show off their skills and win a trophy and gift certificate to the locally owned store of their choice. Participants who come dressed as a bee will receive a free round of “Survivor”-like immunity, meaning you can fudge a round and remain in the game. Sign-ups start an hour before the event. Drinking starts whenever. —Jonathan Meador

Linda Sinclair’s favorite thing to hear from people who see her photography is: “I didn’t know Louisville looked like that.” A longtime crafter who always has to keep her hands busy, Sinclair has shown her stained glass, jewelry and wood crafts at art shows and bazaars since the 1970s, but discovered her knack for photography about six years ago. A lifetime resident of Louisville, the city is her favorite subject to shoot, and she tries to capture what stands out to her and might be unseen by others. “I want them to see the Louisville I love,” she says. “The places I see, the things we have in our city that people take for granted and don’t really see when they walk down the street. I try to take pictures that other people don’t take.” —Jane Mattingly

I love artistic couples, those ready-made studio mates who are just as “crazy” as you are. Courtney and Casey McKinney live the creative life, with plenty of art to show for it. Their joint show consists of Casey’s paintings and Courtney’s photography and pottery.

Casey’s past life as a tagger influences his art. “My paintings are a cohesive body of work … (that) contains an urban-graffiti-pop origin. My subject matter is always objective in that it represents different situations of my daily life.”

Courtney’s focus is more internal. “My work … (displays) the human figure and the beauty of nature,” she says. “The two inspirations in this world that have always helped to keep me calm and relaxed during the many times of change or stress in life.” —Jo Anne Triplett